Azrael kills it as usual

A garbled pantomime, nihilistically uninterested in its own cinematic existence, The Smurfs 2 isn't complete garbage. Originally created by Gargamel, and thus an affront to Smurf God, Smurfette (Katy Perry, whimpering a lot) worries her blasphemous nature will eventually cause the all-male Smurf community which lusts after her to stop paying attention. Now a world-famous stage magician, Gargamel (Hank Azaria) uses this to his advantage by sending his "Naughty," Vexy (Christina Ricci), to Smurf-nap her. Original human companions Neil Patrick Harris and Jayma Mays return to help their tiny monster friends. The couple are sweet, with Harris investing some pathos into a drawn-out subplot where he learns to accept the love of his stepfather (Brendan Gleeson, who gets turned into a duck). Like its predecessor, The Smurfs 2 wears its heart on its sleeve, but that message is only skin deep. The filmmakers, actors, even the characters seem bored with all this Smurfing around.

The Smurfs 2 is not showing in any theaters in the area. 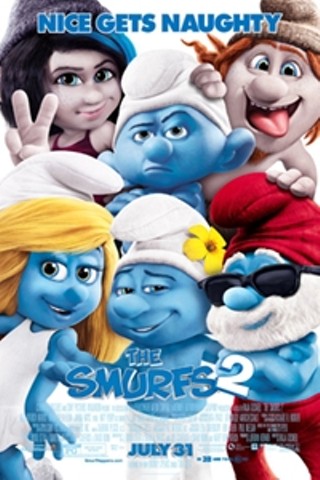