The Squid and The Whale 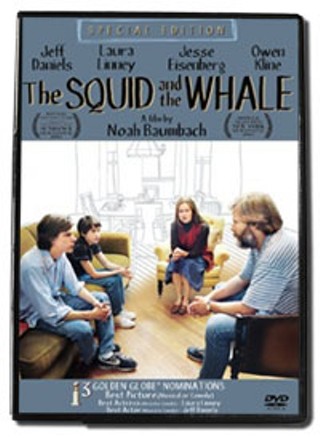 The Squid and The Whale
Directed by Noah Baumbach
(American Empirical Pictures)
Noah Baumbach wrote and directed this dark comedy about a Brooklyn family going through divorce in the late 1980s based on his own childhood recollections. Baumbach is a Wes Anderson collaborator, and co-wrote The Life Aquatic with Steve Zissou. The movie stars Jeff Daniels, in his best role to date, as Bernard, a one-time novelist who hasn’t been able to follow up his first success. Laura Linney plays his wife, Joan, also a writer. The marriage is in its death throes when we enter the story: Joan leaves Bernard, and two sons, teenaged Walt (Jesse Eisenberg) and pre-teen Frank (Owen Kline) have to deal with the emotional fallout of joint custody on the Park Slope. The performances are sterling, the writing excellent and the laughs unexpected---when they come---but prepare yourself for a painfully intimate, squirm-inducing portrait of modern familial disfunction. The adults, especially Bernard, are smugly intellectual and manipulative, yet clueless. The boys get twisted by the experience, and lash out at their peers (including Anna Paquin and Halley Feiffer in strong support) and their parents without entirely understanding why. It’s more fun than it sounds, but not much.
—Carsten Knox