The Stanfields shake up

With the release of a new record slated for September, The Stanfields unveil a ferocious sound, look, and chapter for the dirtiest band in the HRM. 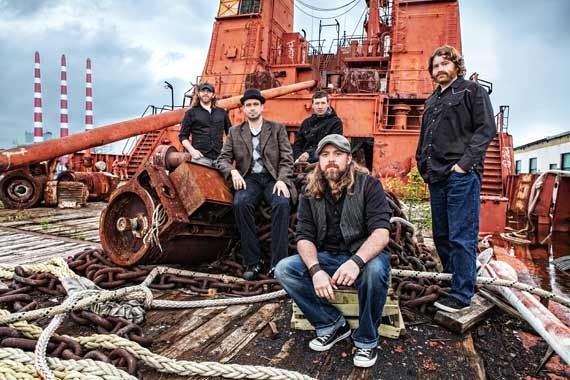 The Stanfields, with two new members and a record in the can, are doing it their own way.

The Stanfields' new single, "Fight Song," hit radio airwaves last week following the announcement of new members Dillan Tate (bass) and Calen Kinney (bouzouki/fiddle) replacing founding fathers Craig Harris and Jason Wright. "We're all 35 years old, we've experienced a lot of things and for them"— Wright and Harris—"I think it was important to start focusing on their families," explains frontperson Jon Landry. "We all understood; there was nothing about this that had a hint of animosity—we're brothers—it all came from understanding."

The release of their fourth full-length album, Modem Operandi, recorded at Codapop Studios, means 18 to 20 months of touring Canada and abroad. A big commitment for anyone, especially a family man. About a month ago Wright and then Harris decided to walk away.

"Craig and Jason initially, to their credit, said, 'we'll see this through for the cycle,' but then it started making more sense, since we had the downtime right now, to bring these clowns in," says Landry on the decision to keep going being unanimous. "We wanted Dillan and Calen on board. We can't replace Jason and Craig, but that doesn't mean we can't change and move on and do something equally as stimulating and rewarding."

Buds on and off the court, the choice of Tate and Kinney goes beyond them being proven players. The two come from the recently abolished band The Fourth Well, where they formed a friendship with the band's then-producer, Landry. "To me, a lot of the value this band gives to the public is our background, our stock, their abilities speak for themselves," he says. "Dillan's an asphalt guy, and Calen's from Pictou County; it's beyond being guys that could play well together, there's an understanding about our backgrounds that makes things a little bit easier."

The new record was recorded last December. Landry produced it himself and explains that it isn't full of "The Dirtiest Drunk" or "Ship To Shore"-style tunes. "We wanted to make a record that was very much outside the typical Stanfields wheelhouse—the sing-a-longy, four-on-the-floor kind of shit," he says. "There's a lot of experimentation to broaden the palate a little bit. We definitely made something that I'm proud of. It was done all on our own terms, happy to stand by it, can't wait to tour it."