A theatre troupe making it work—and making art—wherever it can. 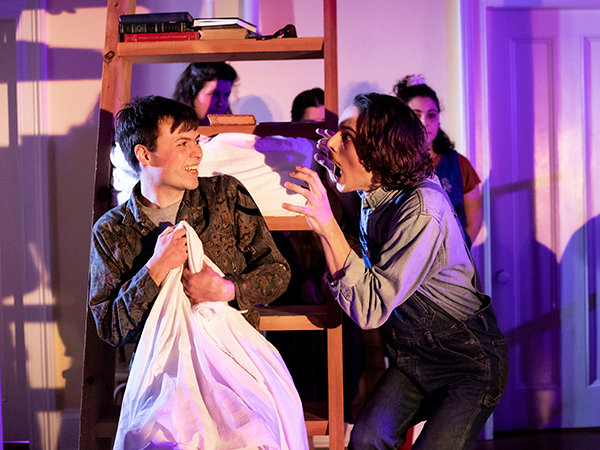 Any space can become a theatre if you look at it the right way. That's what Steady Theatre Co. is doing with its latest play, Listen to the Wind, by Ontario writer James Reaney. Having staged Macbeth in the Halifax Citadel at this time last year, the theatre troupe has now moved into the James McCully mansion, a heritage home on Brunswick Street. In a city with fewer and fewer performance spaces, artists have no choice but to be a little more creative in order to survive.

"We've been scrappy and we knew we'd have to do that," says Julia Schultz, artistic director of the company and director of its current production.

The Bus Stop Theatre, where the majority of independent theatre in Halifax takes place, is one of the last remaining affordable venues in Halifax. It is booked solid year-round and many groups find themselves scrambling for an alternative. A smattering of productions has taken place at Shakespeare by the Sea's Park Place theatre, but the company occupies the space for a large part of the year. With city council recently approving $250,000 of funding to the Bus Stop Theatre Co-operative, its future is looking brighter than many might have predicted. Still, the survival of the theatre doesn't change the current situation and the need for more space.

"If it doesn't look like there's any direction where it's getting easier, if there aren't going to be more spaces available and more funding available, then places like Toronto become more and more appealing," says Schultz. "To stay here you have to make a lot of work for yourself and it can be hard."

The Waiting Room, a theatre created in the former bus terminal on Almon Street, closed its doors in 2018. The Living Room, the rehearsal and performance space operated by Theatre Nova Scotia, also closed the same year.

Kirsten Bruce, the producer of Listen to the Wind, moved to Halifax five years ago and has found it difficult to make a living in the arts. Despite the challenges, Bruce plans to stick it out, opting to imagine a city that can still fix the problem and find new ways to support the performing arts.

The themes of the intrepid young company's new show are apt to this conversation. Listen to the Wind is about a group of children putting on a play in their parents' house, with nothing but their imagination and a little gumption.

"There's a great line from the play," says Schultz, "'Four chairs can be anything.' Which is kind of the thesis of the play. Creativity begins with four children, or a team of 15 young adults who don't have enough money but are doing it anyway. You can find the sublime in four chairs and a commitment and a belief in the story and the fantasy."