The struggle of a Muslim woman of colour in Halifax

Why the value of an inclusive world is far greater than the cost of achieving it. 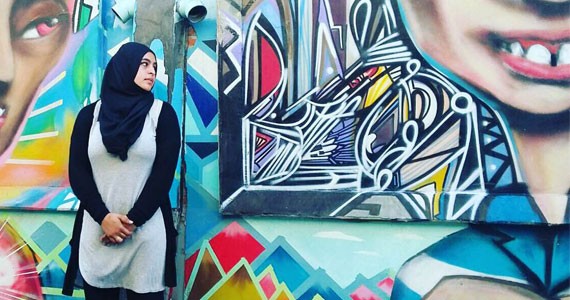 “You’re not from here,” a phrase that has been said to me so many times, I can’t count. Simple tasks such as running to the bank, filled with stares. Stares that say more than words—expressing emotions and passing judgment. Much like that kid in the playground that gets chosen last to be part of a team, I felt as though no one would ever choose me. So I look in the mirror, trying to figure out what it is about me that scares people in my hometown, the place I was born, the place I have lived in for the past 21 years. Is it my tan skin? Is it my crooked smile? Is it my brown eyes? Am I an intimidating woman because I’m slightly taller than most? Is it my intelligence that scares them?

I have watched my parents deal with racism in this city. I have watched them be questioned as to why they came to a land that was “not theirs.” We’ve been told to go home so many times. Why don’t they realize the only home I know is here, Halifax? The racism my parents dealt with had never hit me until I faced it. At that moment, my father couldn’t protect me and my mother couldn’t defend me. I had to become the adult in the situation and defend my right to be here in Canada as a proud Scotian. It forced me to grow up quick, but most of all I got used to the rhetoric causing a struggle within me. I started to question my identity. Who am I?

As far as ethnicity goes I’m Afghani, my roots from a war torn land that has struggled for decades. My grandparents came here in attempts for a better life for their kids and future generations. They had no idea this was the stigma we would face. As immigrants, you might imagine, my parent’s work ethic is like none other. My father is a reputable business owner and my mother is a woman so driven about education she received a master’s in it. As a child I had worked with my father to gain experience with the family business, referring to me as his big Boss, he encouraged me to become quite the little sales lady.

When I was 17, I decided it was time for me to venture into to the real world and get a job at the mall. Every day after school I would hand out resumes and fill out job applications. I was determined to be the next teeny bopper working at the most popular denim store for my people—the teenagers. To my surprise I got the job, but it didn’t feel like it. I was working at the store, but every shift I was sent to the back to clean the washroom because “no one else does it like you.”

This was the first but not the last of this. Countless interviews being perfect for the job, yet not being selected. So I started to second guess myself. Years passed and I couldn’t find a job so I chose to settle for whatever came my way: a fast food chain, everyone’s worst nightmare. At the interview I was asked, “Where did you learn English? You don’t even have a thick accent.” Yes that’s right. Did I take the job? Yes, I did. As a student at Dalhousie with tuition that could cripple any able body I had no choice. But I made sure that during my time there I taught my employers and fellow staff members more about their unknown ignorance. Why? Because I decided who I was when an older lady on Spring Garden asked me where I was from, and when a gentleman welcomed me to Canada. Or when a group of teenagers yelled “terrorist” as my mother and I walked down the street and then asked us where we were hiding Osama. I was an advocate.

As an advocate I started to make my voice echo throughout the city—holding Islamophobia seminars, doing outreach, appearing on TV, taking every chance to educate everyone in my path because how else was I to change my reality? And then they found me. A place where diversity and inclusion is its main goal. A place where I wouldn’t be questioned about where I learnt English or why I came to Canada. A place where I was welcomed in as family and will remain as such. A place that actively listened to my thoughts and allowed me to spread my knowledge. A young Muslim woman’s dream work place: the reachAbility Association. A place that hired me because they were impressed by my intelligence, not intimidated by it. A place where I was treated just as everyone else.

Originally they hired me to be part of their Diversity Awareness Program that covers all spectrums of diversity—mental health, disabilities, LGBTQ+, POCs (people of color), Islamophobia, immigrants and more. A program that preaches a word so decadent it’s like chocolate covered strawberries, or even better imagine your first bite into that perfectly gooey s’more, where the chocolate and marshmallow have melted in divine unison; the word is inclusion.

What surprised me the most was at reachAbility they practiced what they preached. As a summer student working with reachAbility and battling the woes of Ramadan during summer, they gave me every sort of support I needed. They provided me with a place to pray, which is the first time any employer has done so. They gave me time allotted off on Friday so that I could make Jummah, the Friday sermon. They gave me Eid off without question, which is again the first time any employer has done so. I can’t even get Eid off at university. They made it easy for me to be myself in the work place. They included me. This had never happened before. I was always chosen last in this so called employment playground. It was the first time that I was chosen first, alongside all my colleagues.

Six months ago I had given up on finding a job that would take me as I am and appreciate me. Because of reachAbility my outlook on employment has changed. I was viewed as an asset. For the first time people didn’t look at our differences, but saw our similarities.