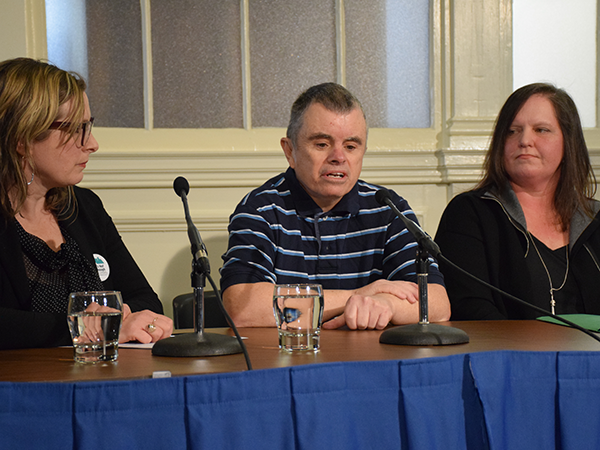 Last Thursday disability advocacy groups presented a letter to the premier, calling on the provincial government to address systemic warehousing of people with disabilities.

"The fact that there are thousands of people with disabilities still living in institutions shows that Nova Scotia is not doing enough to keep these promises and support our rights," says Jeanne Whidden, member of People First Nova Scotia, a self-advocacy group of members who have been labelled with an intellectual disability.

People First Nova Scotia and No More Warehousing: Nova Scotia Association for Inclusive Homes and Support, in collaboration with the Disability Rights Coalition of Nova Scotia, are demanding that government follow through with commitments it made in a 10-year road map plan it endorsed in 2013. The plan recommended an end to large-scale, congregate care facilities and to reduce the disability housing waiting list, which is now more than 1,000 people long.

"The government promised to make changes to the way people with disabilities are supported in this province so that they do not have to live in institutions," says Whidden.

The letter had more than 100 additional signatories from non-profit organizations, government agencies and individuals who support the demand to follow through with the road map's promises.

According to the 2016 census, 240 Nova Scotians between 18 and 60 years old are forced to live in nursing homes despite the government commitment to reform housing for people with disabilities.

Jen Powley, lead organizer of the No More Warehousing Association, says the provincial government doesn't seem to have a specific strategy for supporting people with severe physical disabilities. "They say they have group homes suitable for their needs, but I haven't been able to find them," she says.

She says one of the barriers to finding supported housing is simply the space required for an electric wheelchair, which many with severe physical disabilities use.

Powley's been lucky to have family who can arrange and pay for her to live independently with care support, "but that's not possible anymore," she says. "It costs around $100,000 a year for the service they paid for."

The government currently has eight small options homes on the go. Two are complete, two will open this year, and four have gone to tender.

Community services minister Kelly Regan says the government is working hard to close down institutional care facilities and open more small options homes but since there would also have to be support for the tenants, "it just doesn't happen overnight."

Before the groups' press conference last week, premier McNeil met with a member of People First, Donnie MacLean, who says McNeil was committed to meeting with them and improving disability housing, but no specific promises were made.

NDP community services critic Susan Leblanc says this conversation has been going on for 20 years with little progress. Thirty percent of Nova Scotians live with a disability, and with Canada's ageing population of baby boomer parents, Leblanc says the situation will get worse before it gets better. She's spoken to several parents and caregivers who now care for family members with disabilities on their own, but will lose that ability as they themselves get older.

"There's a whole bunch of people who aren't even being considered right now," says Leblanc, "because they aren't on any waiting list."

All things considered, the government is "super-far behind" on opening small options homes, she says. "The problem is only going to get worse, and more people are going to join the call to action."