The unclaimed dead beneath
our city's streets 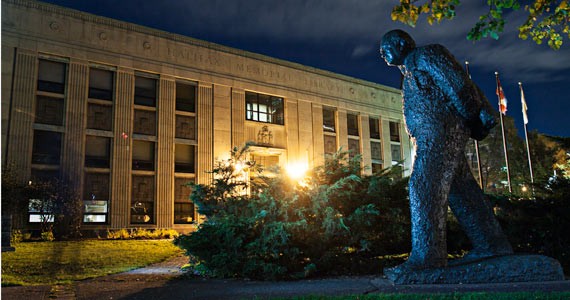 While the new Central Library is a hive of activity, the disused hulk of its predecessor sits down the street quiet as a grave. Fitting, as there’s an actual graveyard underneath the old library property on Spring Garden Road.

That may come as a surprise to some, since there’s no interpretative panel, plaque or marker to give away what lies somewhere beneath Winston Churchill’s striding feet—and there never has been.

The people buried beneath the old library plot–which some historians estimate might number as many as 4,500—include former residents of the Spring Garden Road Poor House, the main building which sat roughly where Doyle Street now runs. When inmates of the poor house died in the 18th and 19th centuries, they were buried without a marker on their graves, says local historian Cynthia Simpson.

No markers might sound callous, though Canadian law was more compassionate than the customs in Europe, where marking pauper’s graves at the time was prohibited. But Simpson, who wrote her Master’s thesis researching the treatment of Halifax’s poor house dead during the 19th and 20th centuries, says she was surprised at how much respect was accorded the dead.

Records suggest that inmates were covered in cloth and buried in coffins (which they built themselves); that they had funeral services in their own denominations; and if they had final requests—as one inmate did, requesting that his body be donated to Dalhousie—they were honoured.

Prior to 1996, Nova Scotia’s Anatomy Act dictated that any unclaimed body found within city limits was to be interred at the expense of the municipality. That task has since shifted to the province. The Medical Examiner now works with the Department of Community Services, who tasks funeral homes around Nova Scotia with conducting the burial. If a body is unidentified, information is shared with law enforcement and the Medical Examiner holds on to the body indefinitely.

For those who can’t afford funerals—including those without families to claim them—expenses are covered as part of the Employment Support and Income Assistance program. In 2014-15, the department spent $1,520,000 on 450 funerals.  That averages out to just $3,375 per person; a paltry sum in interment terms. This means that many funeral homes perform these duties at a loss, says Jonathan DeMont, President of the Funeral Service Association of Nova Scotia. And it means that a gravestone is out of the question. In the end, unclaimed deceased today, like the poor house inmates before them, are laid to rest in unmarked graves. These lonely souls are never cremated, just in case, at long last, someone comes to claim them.

The cemetery on Spring Garden Road was closed in the late 19th century and turned into a park, before a library was built on top. Nothing now marks the final resting place of those unfortunate folks, while the contemporaneous Old Burying Ground across the street—paupers definitely not welcome—occupies a place of pride in Halifax’s self-image.

It’s an indifference that carries over from a time when prevailing attitudes about poverty meant that a pauper’s funeral was “the final stamp of failure,” says Simpson. “The failure was that they never left the poor house, no kin claimed them upon their death, and no marker was placed on their grave. The stigma followed them.”