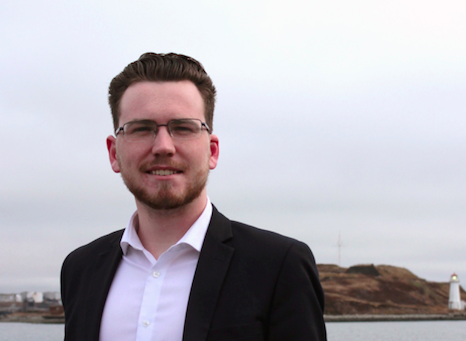 He’s not the most recognizable name for voters, but District 7 candidate Dominick Desjardins is counting on a fresh face being an advantage in October’s HRM election.

Both incumbent Waye Mason and former councillor Sue Uteck have been unable to fix the problems in Halifax South Downtown, he says.

“We’ve had two chances in eight years to do it, and we’ve failed to do so.”

Mason has a strong track record with some files and is a nice guy, says Desjardins, but the councillor has lost a “connection to community.” That’s the word around some of the busy Tim Hortons tables Desjardins been campaigning at, anyway.

“The same issues that were present before him, now eight years later are present again,” says the challenger. “They won’t change if we elect the same individual over again.”

Though he just launched his campaign this past Saturday, Desjardins says he’s been knocking on doors for the past four months. What he’s been hearing about is too few bike lanes at universities, lengthy Access-a-Bus waitlists and a lack of housing diversity in the south end.

“We have condos that are popping up on every street corner on the downtown,” says Desjardins. “I’m by no means against development, but we need to make sure we have a mix of housing.”

The Cineplex theatre manager and president of the Saint Mary’s University Young Liberals association has thrown his hat in the ring against two opponents (Mason, and now Uteck) with years of actual council experience. Far from a drawback, though, Desjardins considers his rookie status an asset to create a functional, less-divided regional council.

“I may be a rookie to say that, and I may be naive to say that, but that’s the reality of building a city,” he says. “We need to work together. Maybe it takes a fresh face to do that. I’m not sure, but we’ve got to have a change.”

Change is definitely in the air. A quarter of HRM’s sitting councillors (Jennifer Watts, Barry Dalrymple, Gloria McCluskey and Reg Rankin) are retiring this fall, and a number of diverse, youthful candidates have stepped up to claim those open seats.

“We haven’t had such a high turnover rate before,” says Desjardins. “It’s really exciting to see that change.”