The waterfront’s next wave

The Halifax waterfront’s snack shacks will have their own delightful neighbourhood when the dust settles. 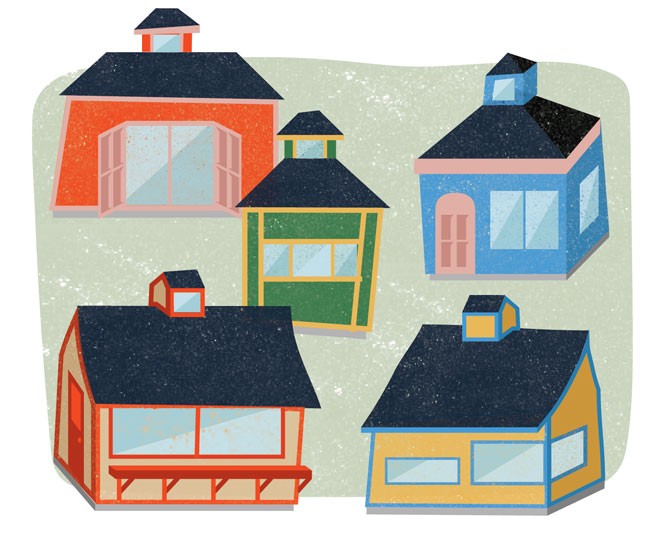 The construction of Queen's Marque continues to make its exasperating mark on the Halifax waterfront this summer, creating dusty havoc in what will likely be a huge tourism season between Canada's 150th and Tall Ships. With June almost at an end and everything from the waterfront kiosks to the sea bridge still unfinished, you'd think nobody knew there was going to be construction on the waterfront. You'd think it hadn't started six months ago.

Finally, though, things are starting to happen, even if it still feels like it is happening in stutters and starts. The sea bridge from Murphy's that will bypass the construction is still being built, behind schedule, with tentative plans to open in early July, and no dates for any kiosk openings have been nailed down. Nor has the name of this new plaza—which is just hilariously being referred to as New Place—but as much as the plans are unfurling more slowly than an off-season fiddlehead, the plans are good.

The biggest change in terms of waterfront business is the move of the seasonal kiosks that used to sit by Queen's Landing, down to the area just past the Stubborn Goat Beer Garden, closer to the Sands at Salter. With this change, Waterfront Development has added more businesses and created a more distinct plaza, doling out longer five-year leases to the businesses in the new spot. It seems sensible: Perhaps Waterfront Development learned something from its disdainful mishandling of 2015's one-year developmental lease with Stillwell Beer Garden. The three-year lease given to the Stubborn Goat Beer Garden appears to have given it solid roots from which to thrive, and these even longer leases feels like a continued investment in small business owners and sustained growth, something that should be foundational as the waterfront continues to be developed.

The beer garden owners said that everybody who drinks a beer needs a pretzel. They said they would send all the customers over to us for fresh pretzels. —Ingrid Dunsworth, The Cake Lady tweet this

Many of the old kiosks are returning, BeaverTails, Heartwood by the Sea, Black Bear Ice Cream and Waterfront Pizza and Wraps, among others. And there are several new food sellers like Deep-Sea Donuts and The Cake Lady.

Some things aren't changing: I Heart Bikes and Segway Nova Scotia remain in their familiar locations, on the curve of Sands at Salter, where they'll be joined by new vendors, including an adventure tour company, Great Earth Expeditions, and a new location for New Scotland Clothing. It's in 20,000 square feet of abutting public space where the new food businesses will be with expanded seating—400 seats in total, including bistro sets, picnic tables and seating walls—eight gender-neutral public washrooms (including two accessible washrooms) and enhanced lighting. There are also plans for a stage area in the future.

Dave Hyndman, owner of Deep-Sea Donuts and the returning Dave's Lobster, is excited about the new layout. "It was nice before because we were on the waterfront, but it was kiosks plunked at the end of a parking lot," he says. "This is a properly developed site, much nicer seating, much nicer layout, and it will be bigger. But it's hard when you're trafficking in site maps and drawings and it will be nice to see the real thing."

This is a properly developed site, much nicer seating, much nicer layout, and it will be bigger. —Dave Hyndman, Dave’s Lobster tweet this

Last time Hyndman visited the site, some of the newer kiosks hasn't been painted yet, and the seating hadn't been installed. "It's going to take some time," he says. "But I think it's going to be really good once it's done. When you stroll around there in early July it's going to be looking really good I think."

Deep-Sea Donuts is a fun addition to the waterfront, a sweet little spot offering up breakfast to waterfront wanderers or a sweet throughout the day. "It's going to be a very simple little thing," Hyndman says. "We're making fresh-made doughnuts all day long using this fun machine called a Donut Robot, that sort of drops the dough into the fat and a little conveyer belt takes it along and pops them out the other end, and we'll top them with a few choices of sugars and toppings."

The cake doughnuts, which can be complemented with coffee, will be topped with things like cinnamon sugar and iced sugar. "I'm toying with one that's honey and sea salt, maybe Nutella," he says. "Simple toppings. What attracted me to this was getting a hot donut fresh off the fryer, and that doesn't lend itself to fancy toppings and glazes."

A familiar face to those who are looking for fancy toppings and glazes, is Ingrid Dunsworth. She's expanding her market business, The Cake Lady, into a kiosk that will sell not only delectable sweets, like her Bavarian apple cake, spitzbuben and butter stollen, but will have a menu of savoury Bavarian cuisine.

"We will have very, very beautiful food there," says Dunsworth. "German pretzel sandwiches, radishes, special cheese called obatzda—a South German traditional cheese we will serve with fresh pretzel—sausages with pretzels. And we will also have things like apple strudel with fresh vanilla ice cream and whipped cream, and coffee and cold drinks like handmade lemonade."

"It's my passion," she says. "I love food." The kiosk is helping her break free of the limitations she has felt as a farmers' market vendor, allowing her to explore more German recipes and dishes. "We can have so much more variety, we can grow. It's very exciting."

Dunsworth is also excited about the feeling of community she gets from waterfront vendors. "The beer garden owners said that everybody who drinks a beer needs a pretzel," she says with a laugh. "And said that they would send all the customers over to us for fresh pretzels."

Over on the other side of the construction, Murphy's the Cable Wharf is still plugging away, business as usual. Since a lot of tours book directly with Murphy's, the construction hasn't really impacted its reservations. "The construction has not been the best sort of placement obviously—we're right behind it—but we're really excited for the floating bridge," says Jessica MacLennan, marketing manager at Murphy's the Cable Wharf. "It's too bad it's been delayed, but ultimately it's a good addition so we're looking forward to it."

But Murphy's will also have a presence on both sides of the construction with the opening of its new kiosk, The Chowder House in the new plaza.

"Chowder has been our most popular menu item ever since forever," says MacLennan. "We wanted to create something that could cater to people's different tastes. There is, after all, not one distinct chowder. So you can customize it to however you like."

At The Chowder House, you'll be able to choose from thick or thin cream bases or a Manhattan-style tomato-based broth, and add your choice of vegetables like potato, corn or celery and your choice of freshly cooked seafood. So if you like a simple lobster chowder, have at 'er, but if you want a rich seafood chowder teeming with mussels, salmon, clams, shrimp, scallops or haddock, you can also go wild.

Most of these businesses would usually have been open long ago—Dave's Lobster usually opens in early May, and counts on the big business of Canada Day, so Hyndman definitely hopes to be open by the long weekend—but once the challenges of construction are behind them, they have faith in the new waterfront design. As Hyndman says, "once it's done and the dust settles it'll be much better than before."