The winds of change

As farmers attempt to move forward from Hurricane Dorian, the future’s on their minds. 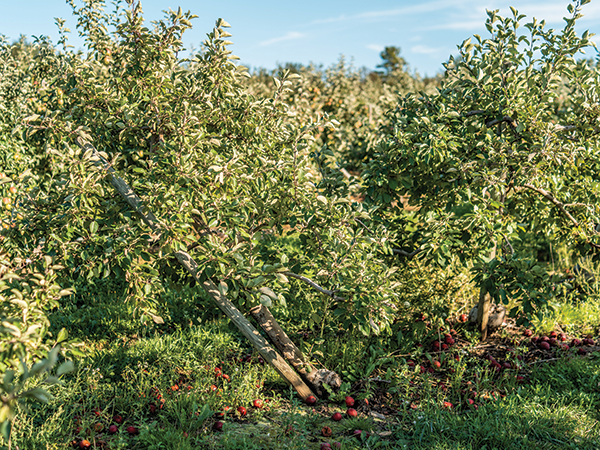 "It's been a double whammy," says Victor Oulton of the extreme weather events in the past two years. Oulton is the president of the Nova Scotia Federation of Agriculture, which recently sent out a survey to assess Dorian's damage. "The total cost from the storm is hard to determine right now, but it will be in the millions of dollars for farmers."

Last year, wine grapes in particular struggled due to a late spring frost in early June, impacting some growers even into this year. "Plants lost their foliage and ran out of time to regrow in the fall," says Ralf Wuhrer, owner of Stonehill Vineyard in the Annapolis Valley. "As a result, some never budded out in the spring, and some budded out and collapsed."

Yet, grape growers seem to have escaped Dorian's blistering rampage relatively unscathed. On average, growers reported minimal damage, the majority consisting of bent or toppled trellis systems. Wuhrer lost around 200 posts from his system, but he says most of them were old and likely would have been replaced in the next few years anyway.

However, the hurricane dealt a heavier blow to apple growers.

"It varies from grower to grower and place to place," says Oulton. "Some have up to 80 percent loss, and some have as low as 20 percent. There has also been structural damage in the orchards. A lot of trees need to be replanted, which means they need three to four years until they're in production again."

The apple varieties that took the most damage seem to be ones of higher value, such as honeycrisp, sweet tango and ambrosia. Due to their short, brittle stems, they were more susceptible to the storm's high winds.

Larry Lutz is the president of the Nova Scotia Fruit Growers' Association, which is made up of more than 70 local growers, packers and processors. "Everyone has been impacted to a greater or lesser extent," he says. "I'm one of the more fortunate ones, and I lost 25 percent of my crop."

Several growers lost over 4,000 trees in the storm. Lutz said that growers have also reported trees that were rocked around in the wind and now have damaged or exposed roots, making them more susceptible to fungal and bacterial diseases next year. These trees need to be straightened, tied back to their trellises and have any exposed roots filled in. However, the main focus in the coming weeks will be harvesting crops.

"A lot of these damaged trees could be dead come spring," says Lutz. "Or, they could take two to three years to recover." To complicate that, he says some growers have discovered many of their remaining apples have been bruised too badly to make grade.

Beth Pattillo of Noggins Corner Farm says that 30 to 40 percent of their crop is now on the ground. Noggins' annual corn maze was flattened from 10 feet to two feet.

While Annapolis Cider Company reported it isn't concerned about running out of apples, Robert Russell, operations manager at Bulwark Cider, suspects there could be a shortage. He says Bulwark experienced a shortage last year due to the late frost, which required building up stock and filling its eight 20,000 litre tanks in the winter and spring, in order to meet demands during summer, cider's peak season. Russell says that next spring will likely be the same: Bulwark will press as many apples as it can throughout the fall and winter months to prepare for summer.

Bulwark buys apples exclusively from Scotian Gold, a co-op owned by 35 growers, that stores, packs, and sells the fruit. David Parrish, CEO of Scotian Gold, says he's worried about the amount of storage rooms that will sit empty after the storm. "We sell to all the main retailers, so there's concern about losing the continuity of supply for your customers," he says. "Our whole model is based on having the right volume to make us profitable. It'll be a tough year."

"If Dorian had hit now," says Russell, "then hypothetically we could have made use of the windfall apples. But because the apples dropped before they were ripe, the sugar content wasn't high enough for our cider."

Mike Lim, co-owner of Chain Yard Urban Cidery, collected a small portion of windfall apples from a cider orchard in Port Williams the day after the storm. "We can use windfalls if we get to them soon enough and rot hasn't started," he says. "But we got very little juice from what we collected." He is waiting for an update from Noggins, Chain Yard's main supplier, on the extent of their damage and if it will be possible to use some of their dropped apples.

After two years of extreme weather events, the local agriculture industry is wary of the growing unpredictability of the climate and the inability to prepare for extreme weather.

"Climate change is real and we're living it every day," says Pattillo. "I think we're struggling as growers to figure out how to deal with it. It's important to support local agriculture. It makes a big difference."

Oulton says that, in order to be a farmer and fruit grower, you learn to be an eternal optimist.

"It's the old farmer's saying: you just hope the next year will be better," echoes Lutz. "What happens is in God's hands. There's nothing we can do about it, except try to do everything right."