All the city’s a stage this summer, making it very easy to secure theatre buff status by the time fall rolls around. 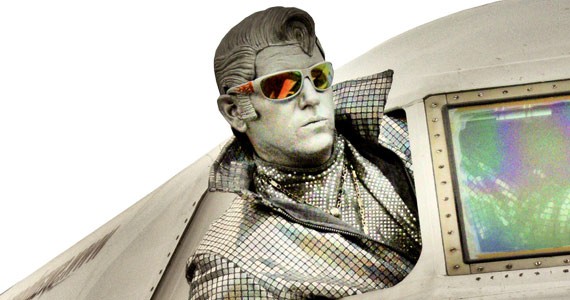 Water balloon gladiator. Soccer ball acrobatics. Human statues. Men in Coats. Aerial Angels. No, these are not random words pieced together for your amusement. They are just a few of the shimmying, shilling and generally entertaining on the Halifax waterfront this summer. Imagine what they do, and then see if you're right.

Do you consider yourself something of an amateur actor? Fancy yourself on stage? Then attend this fun musical and you might get the chance to tread the boards and spell your way to fame and glory. Quirky, hilarious fun! The Pond Playhouse, 6 Parkhill Road, $13-$16, tagtheatre.com

June 30-September 1
Shakespeare by the Sea

As the Bard said, summer's lease hath all too short a date, so don't let this summer pass you by without taking in a play by SBTS. Choose from Hamlet, Much Ado About Nothing or the certain-to-please Snow White. Be sure to wish the team a happy 20th birthday!

It's an exciting summer for Ship's Company with a new artistic producer (Natasha MacLellan) and the premiere of Scott Burke's Diligent River Daughter, about a strong young woman from the Parrsboro shore; and Charlie Rhindress' Making Contact, a wacky love story.

Four great reasons to visit Chester this summer---as if stunning scenery and fabulous restaurants weren't enough! The season opens with Forever Plaid, and continues with Jeremy Webb's dating comedy Fishing, Something Small, by Daniel MacIvor and The Red Row, about Stellarton in the '50s.

Festival Antigonish never fails to deliver what can be considered a quintessential summer theatre experience: pure entertainment, beautifully produced. This year should prove no exception with Run For Your Wife (another romp by the very fun Ray Cooney), Rope's End (a bittersweet relationship comedy) and the intriguing Criminal Genius (cryptically billed as a "low-life" comedy).

July 9 to August 17
Theatre Off the Grid: As You Like It and The Illiad

It's a summer of firsts for Two Planks and a Passion Theatre Company. It's the first time in its 20-plus years that the company has produced a Shakespeare play, and As You Like It seems like the perfect choice. It's not hard to imagine the lovely woods surrounding the Ross Creek centre as the play's "Forest of Arden." The next is using a fire to set the stage for some classic storytelling: Ken Schwartz's adaptation of The Iliad will gather the audience around a bonfire at dusk.

July 10-14 and August 7-11
Lions Den Theatre: Waiting for the Parade and The Iceman Cometh

In July, Lions Den is staging Waiting for the Parade, a heartwarming story featuring an all-female cast about the lives of five women working and waiting on the homefront during World War II. August takes a darker turn with Eugene O'Neill's gritty epic The Iceman Cometh. This play, considered one of the greatest theatrical pieces of the last century, paints a darkly humourous portrait of the world through the eyes of drifters and drunkards biding their time at a boarding house tavern.

Five years of delivering award-winning summer theatre deserves a big celebration, but thanks to a lack of support from our Nova Scotia government, there's no big party in the works for Valley Summer Theatre. Executive producer Bruce Klinger is clearly frustrated by the programs and policies for the cultural sector that make his job much more difficult, and yet he is soldiering on with a scaled-back season. It includes a reprisal of Love Letters (July 20 and 21), Wingfield's Folly (July 26-28) and a reading of Carolyn Hetherington's new play Women Who Shout at the Stars (July 23).

August 10-18
Off the Leash: Under Milkwood

Lucky you! If you missed Dylan Thomas' lovely and lyrical Under Milkwood when it played in Halifax this spring, you'll have a chance to see it in Wolfville. Jeremy Webb and Susan Stackhouse give masterful performances in this delightful "play for words."

While the Fringe festival's Thom Fitzgerald can't promise Rob Ford smoking crack on stage at the Metro Centre, he is promising the 2013 festival will be bigger and better than ever. As well as using a variety of venues across town, this year the Fringe will be hitting the streets with outdoor busker shows.