Date prep takes on a whole different meaning for mobility device users in this city. 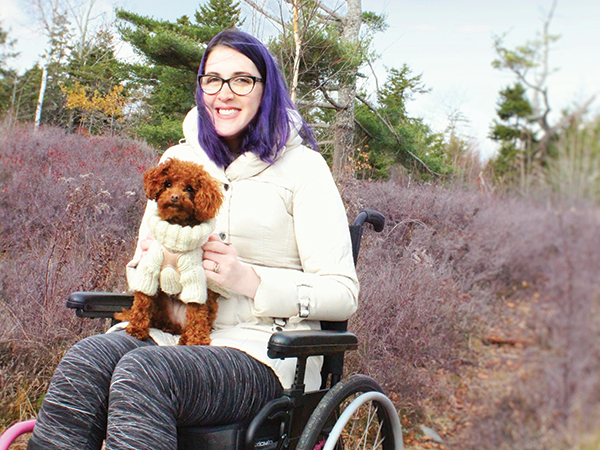 SUBMITTED
Abby Surrette says people with disabilities are expected to "hermit away," but the reality is they live vibrant social lives.

I t was date night. We'd called ahead and made our arrangements. We arrived at the restaurant early to avoid the crowds. Yet we were met with looks of uncertainty and a 10-inch step at the entrance. The server left to find a ramp; turns out the only one was the loading ramp to the kitchen. I would have accepted parading through the back, but my small-frame wheelchair couldn't fit through the narrow, bustling kitchen. Back at square one, several servers surrounded me and took hold of my chair to hoist it up the step. Despite my continued objections to this invasion of personal space, they insisted, "It's no trouble at all!" Once airborne they realized the heavy ornate door actually swung outward, causing a flurry of commotion and shifting hands as they repositioned to fit through the now open doorway. Several minutes later I had made it through the front door with only two near-drops and a hopefully buffable scuff on my wheelchair. Out of breath, the server insisted we let them know if there's anything else they could do and left us to peruse our menus, which they'd left on the high-top table above my head. Even with prior warning of my arrival, and assurance of accessibility, this was the best solution their staff could offer.

While you might be inclined to think that this kerfuffle is the exception rather than the rule in Halifax, you'd be mistaken, because there are no rules. Currently Halifax has no municipal legislation in place regarding accessibility, meaning this restaurant had done everything by the book. On a provincial level, in 2017 the Act Respecting Accessibility in Nova Scotia was passed. While this is a step forward, it primarily focuses on public sector spaces, and even then those spaces have until 2022 to simply come up with a plan to improve. They have until 2030 before any of the accessibility requirements in the act will be enforced.

In the meantime new developments and private businesses are freely allowed to actively worsen accessibility in Halifax. Thirty percent of Nova Scotians currently identify as disabled, and if you're lucky to live long enough, it's inevitable that you will too.

If the goal is a barrier-free Nova Scotia by 2030, why are we allowing new barriers to be built in the meantime? Disabled people don't just live in libraries and courthouses; they shop, they dine, they live their lives. Improving public spaces will be meaningless if private spaces are allowed to continue putting disabled people out of sight and out of mind. When you become disabled, do you intend to hermit away in your hopefully accessible home, never to be seen again unless you need a library book or have jury duty?

In the end, our date night ended shortly after appetizers, not because we weren't hungry, but because I needed to pee and the bathroom was upstairs.