Comforting and flavourful, Silong Pinoy Tambayan feels like home for. 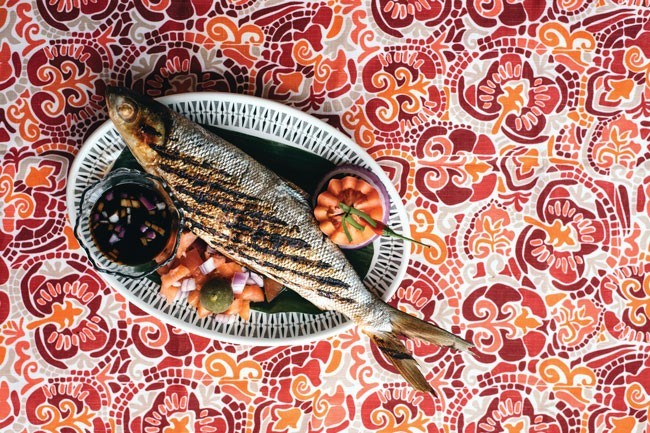 "Pop-pop rolls" are my earliest memory of Filipino food. When I was young, my Nanny and Pop-pop would visit my parents house from Mississauga for a couple weeks every Christmas. They would spend their days watching mass on television, shuffling around the main floor and baking. My siblings and I would come home from school to sweet, sugary rolls topped with cheddar cheese and served in a foil pan. Filipinos know them as ensaymada, we just called them Pop-pop rolls.

I am a third-generation immigrant. I've never been to the Philippines, so food has been one of the only ways I felt a sense of connectedness. Those little rolls were strange and foreign—but they were ours. A baked treat became a familial right of passage.

Nowadays, I'll try and go to any Filipino place in Halifax. They are usually tucked away, grocers hiding in apartment complexes, or behind Mabuhay's infamously deceptive downtown window, which obscures its wonderful sit-down restaurant. My grandparents are getting old and I don't see them much anymore, so I try and find other ways to connect with the Filipino part of me.

"Eat's always fun at Silong," says Erick De Los Reyes in a sing-songy way from over the counter. He laughs and smiles a lot. De Los Reyes opened Silong Pinoy Tambayan (or, Silong Express) in Fairview last year. Hole-in-the-wall is a designation thrown around too much, but it works here. The space is meant to evoke a sari-sari; an essential part of life to Filipinos. A sari-sari is like a convenience store or bodega, family owned stores and eateries that are found all over the Philippines. Silong sells imported dry goods, as well as freshly prepared hot-meals. "There are other sari-saris in Halifax, but [Silong] is the only one that serves food as well."

"Everything is authentic," says De Los Reyes. Silong operates on a rotating menu of Filipino homestyle and street food. I let him pick my meal. He brings me some barbecue pork skewers ($1.70 each). These smoky little numbers have a hit of sweetness and are a certified crowd pleaser: De Los Reyes tells me that he has cooked as many as 1,000 in a few hours for a catered event. I could honestly get down with these all day. The beef pare ($10.50) is the highlight. It even looks kind of like brisket, but the tender strips of beef is cooked with ginger, soy sauce and star anise. There is some sweetness in the meat that distinguishes Filipino food from other Asian cuisines. Topped with green onions and served with white rice (like pretty much everything Filipino), this plate was a home run.

It's hard not to think about the packaged snacks on the shelves of Silong while you are eating. Shrimp chips and chicharrón are among the imported goodies in stock. Shout-out to the C2 green tea that tastes like an Arizona mixed with apple flavouring, which I gather is ubiquitous in the Philippines.

By the time he brings me the boneless milk fish soup, I'm just about too full to continue. I muster the strength to eat most of it. White people be warned–this dish is funky. I mean that in a good way: The delicate white fish is served in a sour broth with okra and tomatoes. I didn't really know what to make of it but my hesitation fell away when I dug in the bowl was warm and comforting.

While eating, I watched people come and go. They picked up their groceries, spoke tagalog with De Los Reyes. One family that had only just arrived in Halifax from the Philippines comes in and buys out his entire stock of cooked rice. The food is foreign to me, but I cannot help but feel just a little at home in the tiny storefront.

As I pay my bill, I spot a selection of homemade treats in take-out containers. I pick up a package to take away with me, inside are those sweet little cheesy rolls. The label says ensaymada, but they look like Pop-pop rolls to me.