There’s Something In the Water runs deep

From book to big screen, Ingrid Waldron teams up with Ellen Page to explore environmental racism. 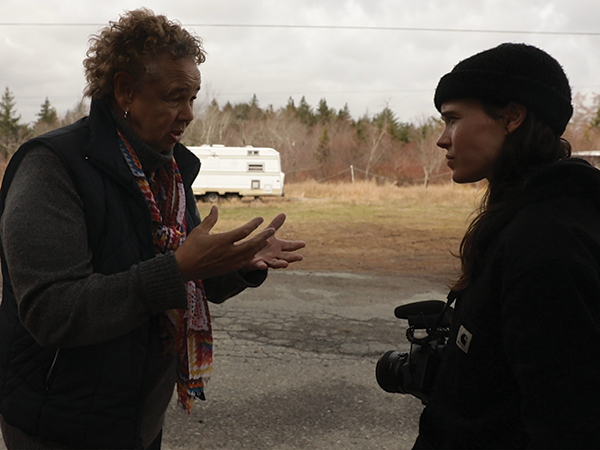 Nearly a year after publishing a book on environmental racism, the story has taken on a new life.

There's Something In the Water by Dalhousie professor Ingrid Waldron is now a 70-minute documentary co-produced by Ellen Page, her Gaycation collaborator Ian Daniel and Julia Sanderson. (Released on Netflix on March 27, you can watch the film here.)

"The fact that...our conversations resulted in this documentary continues to be shocking to me," says Waldron by phone from Toronto, where the film was presented at the Toronto International Film Festival. "Sharing knowledge and sharing it in a way that's going to mobilize people to action is a goal of most academics."

Waldron and Page connected through Twitter in late 2018 when the Halifax-born actor called Waldron's book a must-read. That led to a phone conversation, and Page and Daniel came to Nova Scotia in April to film.

"When we talk about how quickly everything happened, we kind of say it was in the stars," says Waldron, an associate professor at the Dalhousie University School of Nursing.

"In Nova Scotia, in other parts of Canada, in the United States, non-white people, people of colour, Black people and Indigenous people in particular are disproportionally exposed to toxic pollution and contamination as a result of the disproportionate location of toxic industries in their communities," says Waldron, who has researched the topic locally for the last seven years.

While the book is full of hard facts and statistics, the film gives air-time to the women from these communities who Waldron interviewed for her book. (Women from Indian Brook and Pictou Landing First Nation along with Page, Daniel and Waldron will be at the screening of the flick).

"The project that I've been leading over the past seven years is community-based research and grounded in community and it lends itself to story-telling in a way that somebody who's just working with statistics can't," Waldron says of the film's narrative-based approach.

"In order to engage the general public who is not in academia, who may not have access to the information because they're not in academia, it's really important to share stories from the people who are actually impacted."

Waldron hopes and expects to incite action with the broader public and policy-makers while educating and pulling at heartstrings.

"I learned a long time ago as a researcher, particularly if you're trying to impact policy makers—sometimes you do that through the heart, rather than the head," Waldron says.