"They're on the right path," says western First Nation chief about purchase of Clearwater by Mi’kmaq coalition 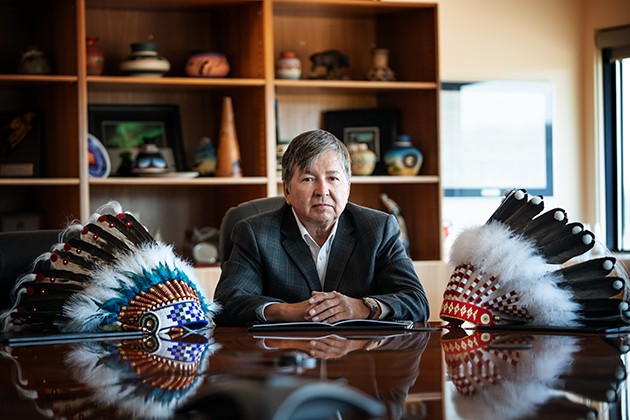 What does Alberta’s oil sands industry have in common with the east coast lobster fishery? Besides employing lots of Nova Scotians, both involve First Nations-owned businesses in a major way. A pending deal means nobody will have more shellfish licenses in Canada than a group of Mi'kmaq First Nations. And Fort McKay First Nation calls itself “among Canada's leading First Nations when it comes to working…with the various oil sands mining companies that operate in our traditional territory.”

Fort McKay First Nation, located about 60 kilometres north of Fort McMurray in Alberta, started its business career over 30 years ago with a humble janitorial contract. Now it's involved in 13 companies—three are owned 100 percent by the band—which provide a variety of services, support and logistics to the area’s oil sands industry.

Fort McKay’s decades of experience provide some perspective to the brand-new acquisition of Clearwater Seafoods by a coalition of Mi’kmaq First Nations and their British Columbia-based partner, Premium Brands Holdings. Fort McKay chief Mel Grandjamb thinks the deal is a “pretty good idea.”

He says Fort McKay's business interest are essential to the prosperity of the First Nation of approximately 800 members.

“It's really important that the First Nation structures their long-term plan so there's revenue streams coming to the nation,” says Grandjamb. “Our government is funded 90 percent from business profit. There's less than 10 percent of our nation that relies on government funding."

The First Nation is responsible for providing infrastructure and programs to its members, including health and education.

"Our First Nation is very supportive, almost every program that we administer is topped off by band profits, meaning the money we receive from the government is not enough,” says Grandjamb. “We, in turn, re-invest all our revenues received back into our community."

Profits from the band’s businesses go into a trust account. From there they are divided into operational funds, business reinvestment and “profit distribution” to all community members.

The profit distribution to individual members works like dividend payments. In profitable years, every member receives a quarterly payment. Members who are under 18 have their payments put into a trust fund, which they can access once they become of age—but only after they’ve completed a financial management course.

"When they're turning 18 there's a substantial amount of money that develops to them, so it's very important that council put the rules in place to ensure there is some responsibility."

In terms of the Clearwater deal, Grandjamb doesn’t know what the Mi’kmaq Coalition’s framework will be. He says it’s very important how they structure it to make sure the profits earned go to the participating First Nations communities. But he thinks it should work out well. “An acquisition of that substance, it can only lead to success."

News of the deal comes after months of tension and violence between Indigenous and non-Indigenous fishers in Nova Scotia, as many First Nations launch moderate livelihood fisheries based on treaty rights between the British and the Mi’kmaq signed in the 18th century.

Clearwater will remain separate from any rights-based fisheries. Chief Mike Sack of the Sipekne’katik First Nation, which is part of the Mi’kmaq Coalition, said in a press conference last Thursday that Clearwater won’t be used to distribute lobster caught under Sipekne’katik’s moderate livelihood fishery.

Sack also announced the Sipekne’katik First Nation and its legal team plan to launch a series of lawsuits against the RCMP and individual non-Indigenous lobster-boat captains. Charges are related to violence and interference, and aim to hold the RCMP accountable for not taking action when non-Indigenous fishers hauled up and cut Indigenous lobster trap lines.

Sipekne’katik also plans a constitutional challenge against the government of Nova Scotia over fish-buying regulations. Currently lobster in the province can only be bought from someone holding a valid commercial license, a law Sipekne’katik says infringes on treaty rights to earn a moderate livelihood.