Thinking outside the vines

From the south shore to Cape Breton, the wine regions outside of the Annapolis Valley navigate a unique set of challenges—and advantages. 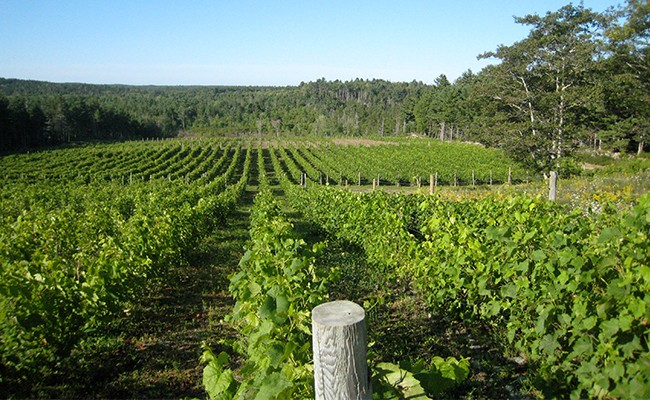 Annapolis, Gaspereau and Avon River valleys and their concentrated cluster of wineries contribute undeniable richness to Nova Scotia's wine landscape. But flanking this heartland, smaller sub-regions spice up the wine scene, presenting new flavours and textures for our kitchen tables.

This diversity in wine is owed not only to Nova Scotia's varied but also to regional cultural differences.

"It's a local thing," says Dan Thimot, president of the South Shore Winegrowers Association. "Our terroir is different."

The south shore is the strongest example of a wine sub-region embracing its identity, with a history of organizing to improve communication and address issues shared by growers in the region. The region's issues are old. Fifty thousand years ago, retreating glaciers shaped the rolling drumlin hills that today define its landscape. These oval-shaped hills offer a unique set of advantages—and challenges—to vineyards planted on their slopes.

Their south-facing sides expose vines to lots of sunshine; their sand, gravel and slate composition means good drainage and low fertility, allowing vines to be planted in greater density. The Atlantic Ocean moderates temperatures in the vineyards, keeping winter temperatures from killing grapevines, and its breezes keep moulds and at bay.

The shape of the drumlins, however, means that parcels of land appropriate for grape growing are seldom greater than three acres. Nova Scotia's original Farm Winery Policy of 1986 demanded 10 estate acres in order to set up a winery, marginalizing grape growers on the south shore. The policy changed in 2000, allowing a class of small farm wineries to set up with just two acres of vineyard.

Members of the South Shore Winegrowers Association are in the final stages of incorporating as a vinification co-operative, with the mandate to collaborate on things like planting an experimental vineyard to build data on south shore grape growing, sharing winery equipment and supporting of vineyards and wineries.

"The dream would be to have five to six labels on the south shore," said Sean Sears, co-owner of Crousetown's Petite Rivière Vineyards, in an interview this past February.

Since then, Elmwood Winery, a small operation built on a two-and-a-half-acre vineyard planted by viticulture pioneer Bruce Wright, opened its doors.

Petite Rivière's winemaker Barbara Thomson focuses her portfolio to show off the drumlin hills' capacity to ripen red grapes. Her Drumlin series features blends and single varietal wines with impressive richness, complexity and a pronounced minerality that reflects the stunning white sand beaches and rocky coastlines of the south shore.

On the other end of the province, Cape Breton Island's first grape winery opened in 2011. Eileanan Brèagha Vineyards, established on a 25-year-old, seven-acre vineyard in the tiny village of Marble Mountain, boasts a majestic view over the Bras d'Or Lakes. While Cape Breton is cooler overall than the rest of the province, those lakes, coupled with deep snow, act as temperature moderator and insulator, keeping vines safe from winter's deep freeze.

Current owner Ken MacLellan increased estate plantings to 15 acres. Eileanan Brèagha's Cayuga sets the winery apart as the grape is not made into single varietal wine anywhere else in the province.

"The community has been great, volunteering whenever we need help," says MacLellan. "And it's a major source of our sales."

Wineries in Lunenburg County, Bear River Valley and on the Northumberland Strait all work the same way—they cater to their neighbours, who in turn invest in the wine producers in their backyard.

"It is the same sentiment and motivation I find elsewhere in Nova Scotia," says Sears of the south shore's relationship with wineries.

"We have a lot more owners than just Barbara and I."