In a city full of outdoor eating and drinking options, here are 12 patios particularly devoted to local brews. 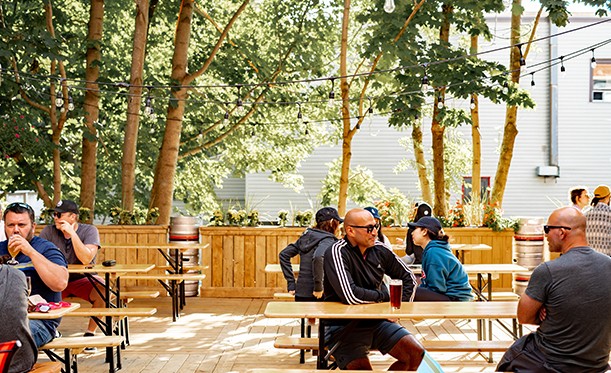 ryan williams
The Oxford Taproom's patio has room for you and your bubble to enjoy some brews .

One of the city's newest cider joints has installed a small-but-mighty patio so you can sip and stay physically distant. As the name implies, its house-made ciders are often sour, and pair nicely with its snacky food menu.

This Bedford brewhouse has a lot going for it, including 15 beers on tap that range from a peanut butter stout to the Sunnyside Blonde paying homage to its Bedford home. The patio is great for the whole family during the day, or meet up to cheers a group of pals at night.

The city's first cidery has been holding down the corner of Agricola and North Streets for just over three years now—and its sidewalk slice of heaven just adds to the appeal. Get your made-in-Halifax apple-a-day in a glass or on one of Unchained Kitchen's summer plates.

The Dartmouth watering hole is a great spot to wet your whistle. Lots craft beer and cider on taps and the perma- backyard-barbecue vibe is the cherry on top.

With its brand-new patio, Garrison Brewing's Oxford Taproom is bringing beer back to Quinpool Road. Reach the patio via the alley it shares with KOD—prepare for pizza cravings to start after a beer or two. Popcorn's on the menu in case you get hungry.

This soon-to-open beer garden is taking over the former home of Chinatown Restaurant, a huge space on the other side of the rail bridge underpass. Expect plenty of room for lounging, lawn games and an imported pizza oven—not to mention plenty of local beer.

This Robie Street brewer's GastroTurf is dog-friendly and secluded from the busy street by a fence. It's a local favourite in the north end for hanging out and trying the unique, small-batch beers Good Robot is known for.

This sweet, cozy taproom at Alderney Landing plans to soon open a new, dog-friendly patio on the rear side. Pop open a can or order a flight, and relax while you watch the ferries running back and forth across the harbour—with live music to boot.

Probably the most well-known secret in the city, Stillwell has fewer tables and no beanbag toss this summer (thanks, COVID), but it's still got plenty of cold craft beer and hot sun. Watch for the beer garden's stepped-up food game—full meals of tacos rather than last year's snack-sized portions—and, in a move previously unknown across Stillwell's three local bars, full table service (thanks, COVID). Don't forget dessert next door at Dairy Bar.

Venture up Portland Street to find North Brewing's taproom and patio this summer. The sunny spot is great for sipping on a Malternate Reality or a pink lemonade hard seltzer.

The gastropub's waterfront outpost returns for another season, offering upscale twists on casual eats plus lotsa suds to go alongside them.

This downtown Dartmouth cidery's sidewalk patio will open the last weekend in July. It's got huge often-open windows that bring the breeze inside, perfect for having a drink within a five-minute walk of the ferry.