In memory of his wife, Mel Slade is helping immigrants grow their own food and forge a community. 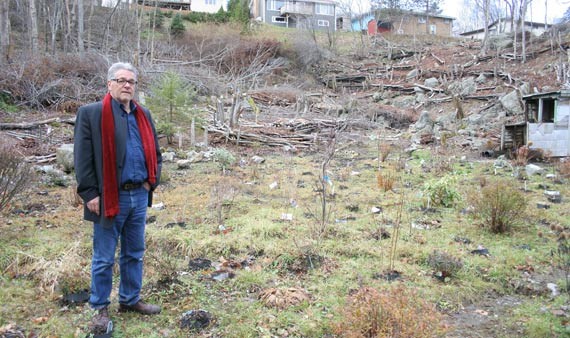 Jonathan Briggins
Mel Slade and his (in progress) community garden.

From the front it looks like any ordinary house on Flamingo Drive, but in behind there’s an acre of land Mel Slade has turned into a community farm. This is Beatonridge Gardens. In its short life, this community garden has become a touch point for Canadians new and old.

Currently there are 12 international gardeners at Beatonridge from countries including Nepal, Bhutan and Guyana. One of the gardeners, Adalbert Museme, is from the Democratic Republic of Congo. He came to Canada in July 2013 because of war in his home country. When he’s not working as an interpreter at the Immigrant Services Association of Nova Scotia (ISANS), Museme grows food at a number of community gardens around the city. He’s planting garlic at Beatonridge Gardens over the winter, and plans to grow maize, kale, pumpkin and other vegetables in the spring.

“Vegetables are expensive here. If you can get a small plot to plant your vegetables, you can go one or two months without spending money” on them, Museme says.

Slade created the garden as a memorial to his wife, Betty Lou Beaton, who passed away last Christmas Eve.

“My wife and I were involved with new Canadians, very passionate about new immigrants and helping them out,” says Slade. He’s been spreading the word about his farm on Kijiji and with the help of ISANS, who has its own Growing Strong Neighbourhoods Project that’s partnered with other community gardens in the city.

Right now, Slade’s backyard is a giant pit, with terraced plots nestled into the slopes. Decomposing leaves are enriching the soil that will be used to grow food next spring. As the pit descends, the land grows flatter and becomes layered with more 200-square-foot rectangular plots and grassy area with small shrubs and perennials. It looks chaotic.

“When it started, you needed to be a person of vision to see what was happening,” says Slade.

Some of his neighbours were a little lacking in that vision, he says. There was a mixed reaction after Slade started cutting down the trees in his backyard last spring. Some appreciated having a better view of the Bedford Basin, while others were disappointed by the loss of privacy. But it’s private land and Slade’s consulted with government officials from the city and province. All parties have given him the go-ahead to continue building his garden.

Museme helped Slade cut down some of the trees, and tries to share his agricultural knowledge with his fellow gardeners.

Gardening “has been part of my life since coming to Canada,” he says. “You interact with different people and hear different ideas of how they’ve done gardening in their countries.”

Garden plots are available to anyone after they do eight hours of work at Beatonridge. Once they have a plot, the gardeners are responsible for 12 hours of work per season during designated work days. Outside of that, they’re free to use the land and soil and work on the plot any time between May and the end of October.

"Solar chickens" and the future of farming