Councillors Linda Mosher, Russell Walker and Reg Rankin and Halifax Water manager Barry Geddes all knew about the project, but failed to tell the Chain of Lakes Trail Association.

Seven weeks later, Halifax council approved the sewer project. No citizens objected to the proposal, but how could they? They hadn’t been informed of it. 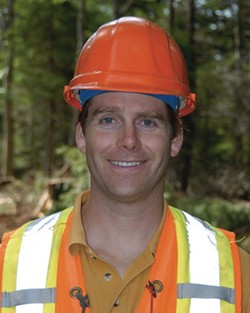 Barry Geddes, Halifax Water's watershed manager
The Chain of Lakes Trail Association is an on-again/off-again group first created in 2009, just after the city bought the abandoned Chester Spur rail line, board member Madeline Berrigan tells The Coast. From the start, Barry Geddes the watershed manager for Halifax Water, has been connected to the group.

“He’s always been around,” says Berrigan of Geddes. “He was on the initial committee, because he’d go to all the meetings, way at the beginning, and then after it disbanded, Barry was always there, representing the Water Commission.”

Geddes did not respond to an interview request. But it makes sense that a Halifax Water representative would be on the group, as the trail travels through the Chain of Lakes Watershed, which is an emergency water supply for the city of Halifax. Geddes, who lives in Enfield, was precluded from being on the board of directors of COLTA by its bylaws, which required board members to live in the immediate vicinity of the trail, defined as within the former council districts the trail travels through.

But even though the city website highlights the importance of COLTA since 2009, documents at the Joint Registry of Stocks show that COLTA was not organized as a legal society until March 7, 2011, and folded a year later. The documents note that COLTA defaulted—failed to pay its annual registration fee and therefore lost its legal standing—on May 4, 2012.

These kinds of difficulties face many such citizens’ groups: interests wane, people have other priorities and the society languishes. But soon after it defaulted, COLTA president Lorne Logan put out a call for volunteers, and COLTA was reinstated with the Registry, with a new board of directors.

The document naming the new board of directors is dated June 21, 2012, but was not received by the Registry until October 9, 2012—the day after a new council was elected. The new directors included newly reelected councillors Linda Mosher and Russell Walker, as well as Mary Wile, who lost her bid for reelection to Reg Rankin. Eleven other people were also named or reappointed to the board.

That incarnation of the COLTA board existed through the spring of 2013, when according to Berrigan, COLTA had its last meeting. Still, even though Berrigan says the board has not met since “April or May,” a set of documents dated June 6, 2013 outline several changes to the organization: the bylaws were changed, apparently allowing Geddes to be named to the board of directors, Wile and another member were taken off the board and Rankin was put on. The documents don’t say how these changes could be made without board approval, but they are signed by Logan. Logan did not respond to a request for an interview.

Besides eight citizens, the newly reconstituted board included three sitting councillors—Mosher, Walker and Rankin—and a manager from Halifax Water—Geddes. The document spelling out that membership was received by the Registry of Joint Stocks on June 12, 2013. Seven weeks later, on July 30, 2013, council voted to approve the project.

The councillors all knew of the sewer proposal—they each told council they had been in consultations with Halifax Water about it—and presumably Geddes, as a Halifax Water official, also knew about it. And yet none of the four told the other COLTA board members. The other board members learned of the project through media reports, after it was approved.

“We thought it was quite strange,” says Berrigan.

Not knowing about the sewer proposal, COLTA had no ability to object to it. Still, Berrigan seems to accept the post-facto explanation offered for the sewer project.

“It’s too bad they didn’t think of it two years ago, or three years ago,” she says. “That was the first. And secondly, they’ve done studies on it, and it will be the least expensive way of doing it.”