An award-winning Halifax short gets a boost from Issa Rae. 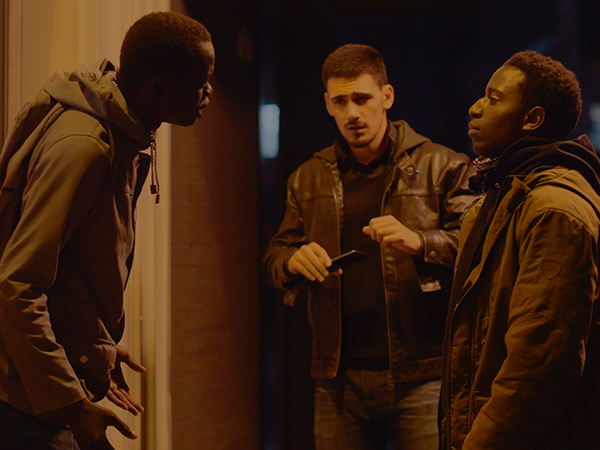 The premise of the local short Thug comes from real life: Three aspirational actors—Simon Mutuyimana, Emmanuel John and Joshua Schlagenweit—shoot a film in the streets of Halifax. So, too, does the film's critical story point, when a scene of violence is mistaken for truth.

"They're in a Starbucks parking lot and the cops pulled up on them thinking it was a real-life incident," says Thug's director Dan Boos of John and Schlagenweit's acting exercise gone awry. "In real life there was no knife, they had scripts. They were able to prove pretty quickly it was a fictional scene. They took selfies with the cops."

Here's where fact and fiction diverge: In the film, they're arrested, which throws their interpersonal relationships and artistic energy into upheaval. Thug won Best Atlantic Short and Outstanding Actor for Mutuyimana at the 2017 Atlantic International Film Festival and three Screen Nova Scotia Awards before taking a spin around the festival circuit. On March 3 it got some new life from Issa Rae, the Insecure creator and star who came up through YouTube and "brings you quality content of colour" via her channel Issa Rae Presents.

"Her YouTube channel is a platform for Black creatives' content so I think what it means—I'm not Black—is it's a testament to the authenticity of the story and the relatability of the film, with this recognition," says Boos.

All three actors—"a real-life trio of best friends and aspiring actors"—are credited as co-writers on Thug; Boos describes it as "a unique collaborative process" that involved six months of hanging out with occasional directed writing exercises, which revealed "those ideas and conflicts they have their own lives trying to get those stories out and trying to play those types of characters," he says. There was also a period of improv: "Every time we came to a decision in the story, I made sure it was something we agreed upon as a group," says Boos.

The police-involved incident in Halifax became the crux. Even though their experience worked out fine, "It just seemed like a really complex and multilayered scenario," says Boos. "What it did for us was highlight the overlap between stereotypes in film and TV as they're represented and propagated in film and TV. And how they have impact in the real world; how fictional representation, specifically of young Black men, can have real repercussions."

With Rae's support—gained through the Montreal distributor La Distributrice—it means a local short gets not just a rare opportunity to be seen outside festivals, but by an audience reflected in it. "I'm just happy that the film has an online platform where it's going to get seen," says Boos, who admits he's been watching the hit count, "and its message is going to get out there and disseminated."