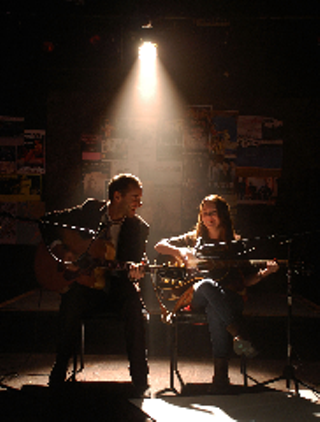 An improbably PG rock movie, Janie Jones stars Abigail Breslin in the title role as the long-lost daughter of Ethan Brand (Alessandro Nivola, who does great rock star). When her crackhead mother (Elisabeth Shue) abandons her in Little Rock, Ethan’s stuck with a vibe-harshing 13-year-old on tour. Then his band is dropped by its label, tour support is pulled and the rest of them bail, leaving Ethan to finish up this former arena, now dive bar string of dates alone. But wouldn’t you know talent is inherited and Janie’s a gifted singer-songwriter herself? (Breslin does all of her own singing—and none of her own guitar-playing—and it’s awesome. The music was written by Mercury Prize nominee Gemma Hayes.) It’s even tamer than Almost Famous, but it’s not about The Music, it’s about Fatherhood. It reminds me of one of those Disney movies about sports. I liked it.

Close but not quite—there’s a tagline for you, TIFF 010—was Peep World, a comedy about four siblings on the day of their father’s annual birthday dinner. He’s rich, they’re not, and the youngest, Nick (Ben Schwartz), has written a very popular book about their lives. Angriest about this is Sherry (Sarah Silverman, showing range), an aspiring actress who plans to sue. Struggling architect Jack (Michael C. Hall) is trying to hide his failures from his pregnant wife (Judy Greer). Rainn Wilson owes big bucks to some big dudes. A strong ensemble led by narrator Lewis Black, Peep World is reasonably funny but never overly so, and the climactic dinner doesn’t feel long enough to support the preceding hourish before it.

My last screening of TIFF 010—some people are saying this is a great year; I must’ve missed those films—was the excellent documentary Mother of Rock: Lillian Roxon, about the influential Australian journalist who helped propel New York punk into the mainstream (her best friend was Linda Eastman, soon to be Linda McCartney), hanging out with Warhol at Max’s Kansas City. Featuring talking head interviews from Iggy Pop, Alice Cooper, Germaine Greer and various confidantes and hangers-on of the time, it also contains great archival photos and excerpts from Roxon’s writings, which at the time were progressive in feminism and music journalism.