September 13, 2016
comment
Sunday is a big, long day, although at least my first movie’s at 10am for once. Vikram Gandhi’s is subject to a technical issue, slowing and stopping twice in the middle. It’s the kind of thing that can cost you a whole screening—I remember [puts on prospector hat] back in the film days (2009), the final reel of Jane Campion’s Bright Star was spliced on backwards. People fled. They rescheduled it but there is, frankly, no time for rescheduling. The faithful at Barry were rewarded—the story of Barack Obama’s early days at school in a very shitty New York in the early ’80s, dating a white woman, learning about where he fits in and how he’s expected to as an educated black man. It’s not overly sentimental about the now-US president—we were all young dinks at some point—and Devon Terrell has a nice turn as the titular character. (Not to be confused with the other Obama-in-the-80s movie, Southside with You, about he and Michelle meeting. Michelle is not in Barry.)

The festival film I’m most excited about is Moonlight—in 2008, in a 30-person screening room, I saw a movie called Medicine for Melancholy which became my favourite film of that year. A gentle, romantic two-hander with political undertones, it was directed by Barry Jenkins. This new one, based on a play, is a gay coming-of-age story. I’ve been excited for him to follow up Medicine and the Moonlight buzz is huge, as evidenced by the giant crowd in that awful IMAX theatre I couldn’t get into before. (I am early in life, always late at TIFF. It’s maddening. Schedules!)

Jenkins has outdone himself. Chiron, played at three different ages as child (Alex Hibbert), teen (Ashton Sanders) and adult (Trevante Rhodes). Each section of the movie centres on a single incident that sends his life down its next road: Little’s mom (Naomie Harris), a crack addict, screams at him that he’s gay and that’s why the other boys hate him; Chiron, quiet and sensitive but fed up by being bullied at his high school, gets his revenge; Black emerges as the thug his surroundings ordained him to be. There is a drug dealer (Mahershala Ali) who takes Little under his wing; later his girlfriend Teresa (Janelle Monae) remains a beacon for him. And there is a boy, Kevin (Andre Holland as an adult), who he loves but doesn’t have the tools to deal with. It’s a deep, rough, gentle, beautiful movie that’s already being touted as an awards season leader. It’s on at the AFF too; don’t miss it.

After an extended afternoon break I’ve got public-screening tickets to two evening films, American Honey and Manchester By The Sea. A 9:30pm movie when you started 12 hours earlier is always a mistake, especially when you don’t check the runtime of the one before it, which is two hours and 45 minutes, plus festival intro and cast Q&A. (Spoiler alert: I will be seeing Manchester when it closes out the AFF.)

That’s a statement of fact, not complaint: American Honey is one of the best films of this year. Directed by Andrea Arnold (Fish Tank), who is British, it follows a ragtag group of poor kids in a van as they drive around the American south selling magazine subscriptions door-to-door. (Yes it takes place now.) The only names of note are Riley Keough as Crystal, who runs the operation with an iron fist, and Shia LaBeouf, who is remarkably good and not present at the screening. The real find is Sasha Lane, who Arnold discovered on a beach in Panama City, and here she makes her film debut playing someone aptly named Star. A de facto mother to young siblings, with a lecherous stepfather at home, everything about her life screams GTFO when she meets LaBeouf in a parking lot. She joins the crew on the road, and here the film takes on a documentary feel, following their day to day, the monotony of driving, motel life, mixing up a bunch of horny teens. Star herself gets into at least three situations that should go horribly but somehow don’t; Arnold both tests and rewards her audience at different intervals. This is a terrific film.

I saw Whiplash at this festival in 2014, in a small room at the Lightbox. I had to leave before the Q&A they held me back until Miles Teller could make it through the hall unmolested by the likes of me. The theatre was electric and reactionary—the tension created by Damien Chazelle, under 30 at the time, between Teller and JK Simmons as drum student and teacher in an abusive relationship was taut and infuriating. (Teller did all the drumming, but Simmons won an Oscar.) As tends to happen when you’re a young white male director with a single success, Chazelle’s follow-up, two years later, is a big bag-’o-money musical starring Emma Stone and Ryan Gosling. Having learned my Princess of Wales lesson the first time, I ducked down an alley to find the end of the line, although I ended up in more or less the same spot. 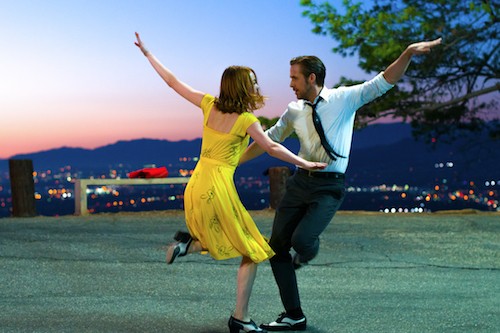 La La Land does not disappoint—in fact, after the opening number featuring a huge choreographed number in the middle of LA traffic, the entire jaded audience of industry insiders and critics applauded, as if it were a Broadway play. There’s tap-dancing! Duets! A fantasy sequence where they dance across space! A JK Simmons cameo! It’s an old-timey razzle-dazzle Hollywood musical, set as they tended to be in Hollywood itself. Stone is Mia, an actor who can’t break through. Gosling is Sebastian, a pianist who wants to open his own jazz club. (The jazz obsession is this movie’s tough nut. Please stop it with the fucking jazz, Damien.) They meet and fall in love, but then their ambitions build roadblocks. While at times effortlessly joyless, it’s also incredibly melancholy, and to his credit Chazelle avoids the typical ending. You are going to hear so much about this. It opens, aptly, on Christmas Day.

This marks the second year running I’ve had to drag my suitcase to the theatre and see some movies on my way to the airport. Last year, there was a little group of suitcases in one of the wide aisles between sections; this year I am the lone embarrassing one. (I hate leaving early!) First up is the terrific Blue Jay, a delicate two-hander starring Sarah Paulson and Mark Duplass as exes who run into each other after a decade. She’s done well; he hasn’t. The film takes place across a single day as they dismantle their old life together, remembering things the same and differently, uncovering old wounds and causing new ones. It’s filmed close-up, in black and white, and at times it feels almost voyeuristic to be watching people at their most vulnerable. It is my favourite thing, a small movie in mostly one location, with lots of talking—that is to say, a great display of acting. This will be coming to Netflix—it’s delicate, heartfelt, and real—don’t miss it.

My final film of the festival stars one of my favourites, Holly Hunter. It’s called Strange Weather, is directed by a woman ( Katherine Dieckmann) and was scored by Sharon Van Etten, who is playing a show here on the weekend in support and I will already be in Halifax, don’t get me started. Hunter plays a woman who's never gotten over the suicide of her son, and when she learns a college friend may have stolen his business idea—and gotten rich off it—she takes her best friend (Carrie Coon) on the road to confront him. She brings a gun, but you won't know until the moment if she plans to use it. Like all Hunter performances it's intense and emotional; the film itself is kinda like TIFF this year—a few really high highs with a lot of very good at the core.