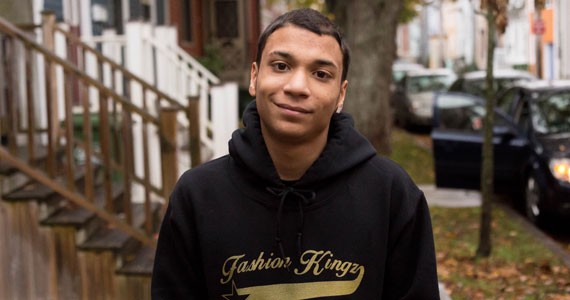 “Everyone deserves to feel powerful in their own way,” says Unique Jones. “That’s what I want my clothing line to express.”

Jones, a 20-year-old designer, crafts a custom collection in Fashion Kingz, encouraging everyone and anyone to adorn themselves in comfy, feel-good garments. An arbiter of street style, Jones says the inspiration to start his own clothing line sparked nearly three years ago, but he never thought this dream would come to fruition.

The idea happened on a whim.

“I’ve always liked to look good,” he says. “I thought one day, ‘Hey, it may be cool to share my style with other people,’ but I didn’t take it seriously at first because I didn’t think it was something I could actually do.”

Jones credits the growth of his business to the OPtions: Youth Program—a program partnering with Service Canada and the Sobey School Business Development Centre aiding in evolving its participants’ soft skills to help them succeed in their futures. During Jones’ six-month enrollment, he began to lay the foundation for what eventually became Fashion Kingz. After experiencing challenges in his mandatory work placement during this time, he was paired up to work with Alex MacLean, creator and owner of East Coast Lifestyle. The moment that happened, Jones says, is when everything changed.

“The choice to stick with what I was doing was because of Alex,” says Jones. “He showed me the ropes about business and taught me the positives and negatives this industry has.” Jones says the creative connection was instant. In October of last year, he was working alongside MacLean at the East Coast Lifestyle warehouse when Jones decided show MacLean his designs.

“He’s been there for me every step of the way, he guides me through it,” says Jones, “and that’s what motivates me to keep going, knowing he’s on my side.”

After drawing inspiration from how other clothing lines communicated their messages, Jones decided to design a crown as a representation of power and MacLean inspired him to include “fashion” in the brand’s name. Both stuck. It was then and there Jones says he solidified his collections motivation and aesthetic.

“Initially the clothing was targeted for men, but after getting feedback from women in the community, I decided to branch out and make stuff for women too,” he says. “To me now, a fashion king can mean more. It’s just about when you stand out and look good, you feel powerful.”

Jones reiterates how the “look good, feel good” mentality is important to him and how he hopes to continue making waves with that mantra in the industry.

Though he’s been selling shirts, sweaters and jerseys for only about a year now, Jones has decided to expand his collection for the winter season. Fashion Kingz boasts bombers, toques, sweatpants, scarves—anything that will keep you warm—within the next couple months. He’s also working on pillows, blankets and patches.

“Being from the north end of Halifax, a lot of people have dreams but take different routes,” he says. “I never thought a normal kid like me who’s experienced a lot of challenges in school, the community and just a general lack of motivation could be where I am right now.”

Jones says he knows every business has to take a loss at some point, and while he’s faced his fair share of challenges branding and promoting his collection, he has no plans to slow down.

“I started paying attention and motivating myself,” he says, “and it got me on the right path that I’m still on today and I’m excited to see where this all goes.”