Time for a second look at Alton Gas

by Michelle Paul and Sadie Beaton 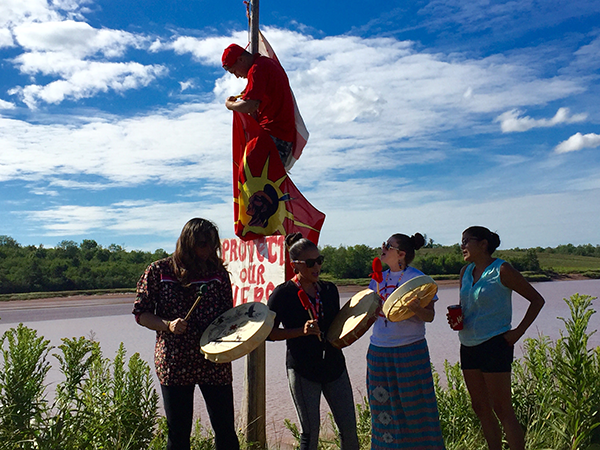 L ast week, news came down that we have a new environment minister: Gordon Wilson has replaced Margaret Miller.

We welcome a fresh set of eyes on this important file. Minister Wilson arrives at a critical time to do right by Mi'kmaq communities dealing with environmental racism—from Pictou Landing First Nation's long struggle to make Northern Pulp accountable, to the debacle that is the proposed Alton Natural Gas Storage project.

Just before her departure, Margaret Miller re-affirmed Alton Gas' industrial approval, asserting that consultation with Mi'kmaq rights holders had been "sufficient," and that the science demonstrates "no impact" to the Sipekne'katik (Shubenacadie) River ecosystem. Both of these assertions are flawed in our view.

Mi'kmaq rights holders have never given consent for this project. Rights holders (along with Nova Scotians living nearby) weren't notified, learning of Alton Gas' plans only after they saw pipe being laid across Highway 2 in 2014, seven years after the province approved the project. Nearby Sipekne'katik First Nation appealed the project's industrial approval to the Supreme Court of Nova Scotia, questioning the province's consultation, and as recently as April 19, the Assembly of Mi'kmaq Chiefs stated, "The Assembly does not support the Alton Gas project."

The continuous presence of Mi'kmaq water protectors at the river since 2014 further indicates the resolve to expel Alton Gas from our territory. This was underlined by an eviction notice from Mi'kmaq grandmothers dated March 11 and the arrest of three grandmothers for protecting the river on April 10.

When it comes to the science, who could believe a project proposing to dump up to 3,000 tonnes of hard salt and other minerals into an estuarine river every day for years on end would have "no impact"? The scientific studies underpinning provincial approvals have been paid for by Alton Gas and leave many important questions unanswered.

Water protectors had to use Freedom of Information requests to confirm what they had known all along: The brine that Alton Gas proposes to discharge is a deleterious—"causing harm or damage"—substance.

The growing number of Nova Scotians who support the water protectors' position should offer Wilson pause. A SumofUs petition has collected over 17,000 signatures so far, and we've also received statements of support from the Anglican Diocese of Nova Scotia and PEI, The Avon River Heritage Society, the Ecology Action Centre and the Sisters of St. Martha in Antigonish. Ellen Page has also been using her platform to show the world that the Nova Scotia government continues to be complicit when it comes to environmental racism.

We trust that minister Gordon Wilson will take a sober second look at this Alberta-based company's efforts to push forward a reckless fossil fuel project that has neither credible science nor Mi'kmaq grandmothers or rights holders—not to mention nuns!—on their side.