The pressure is on to avoid climate catastrophe. What can we do about it? 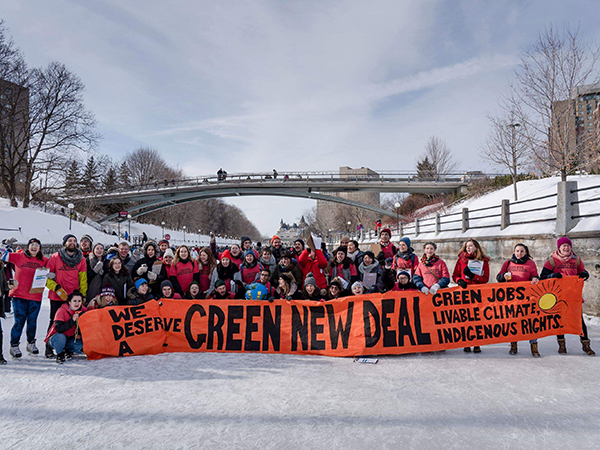 We have just 11 years to cut global emissions in half in order to avoid climate catastrophe. Young people like myself are justifiably scared for our futures. This year is critical—and terrifying—as the federal election is under 180 days away. Our prime minister, who was elected mostly by young people on a platform of climate action, recently bought a pipeline with $4.5 billion of public money while the leader of the official opposition shared a stage with white supremacists to speak at a pro-pipeline rally. Elections across the country have shown us that people are dissatisfied with status quo politics. But dissatisfaction has played out in different ways, with Conservative governments being elected in Ontario and Alberta, and the Green Party forming the official opposition in PEI.

The seas are rising, but so are people, especially young people; it's very possible, the tides of history are turning before our eyes. Thousands of young people from the Sunrise Movement and one millennial congresswoman in the United States launched the idea of a Green New Deal into US public consciousness last fall. Hundreds of thousands of young people around the world have been striking from school every Friday for months, inspired by 16-year-old Greta Thunberg.

Earlier this month, young people across Canada launched the Our Time campaign (our-time.ca) and are organizing around a Green New Deal that will ensure Indigenous rights, migrant justice, good work for all and a livable climate for our generation and future generations. Status quo politics are allowing far-right xenophobic political movements to spread. Almost all political parties are still championing fossil fuel expansion, ignoring its effects on water, the climate and Indigenous communities. The 2019 federal election will be our time to push all political parties to be forward-thinking and courageous to fight for a livable future.

As young people in Nova Scotia, this is our time to imagine a future where our communities can thrive. "We can be anything we have the courage to see," says Alexandria Ocasio-Cortez. For many young people, myself included, it can feel impossible to imagine our futures—everything in this moment is so uncertain that even looking one year ahead can feel daunting, let alone trying to imagine beyond this 11-year deadline. But this is our time step up to build the future we deserve, because we know there's no time to not dream and act with courage.


Laura Cutmore is an organizer with Our Time in Halifax/K'jipuktuk.
———
Voice of the City is a platform for any and all Halifax individuals to share their diverse opinions and writings. The Coast does not necessarily endorse the views of those published. Our editors reserve the right to alter submissions for clarity, length, content and style. Want to appear in this section? Submissions can be sent to voice@thecoast.ca.