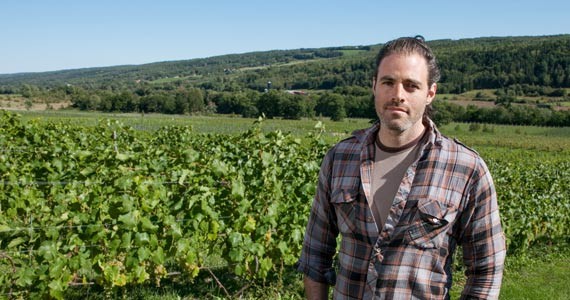 When Jean-Benoit Deslauriers came to Benjamin Bridge winery in Wolfville from California in 2008, he had an interest in working with the owners, the McConnell-Gordon family, but he didn't imagine he'd have a winemaker's dream job.

"It was hard to predict the extent to which I would be empowered to do whatever it takes to make the best possible wines. Perhaps it's because it's a winemaker's dream come true, so I didn't want to have lofty expectations," says Deslauriers. "The proof is in the making; you don't age a sparkling for 10 years [their Brut Reserve sparkling wines] if you're in it to cut corners. In the industry, there's often a fracture between a romantic marketing message and the actual practices behind the scene. At Benjamin Bridge, it's the complete opposite. We relate to quality as the sum of many parts, and winemaking [here] is a game of inches." Meaning the winery doesn't clog up inboxes or hold press conferences announcing they've gone organic, they just quietly do it because they believe it will make a better grape, and a better wine.

It's not gone unnoticed. The 2004 Brut Reserve flew off the shelves, and their crisp white, Nova 7 is making waves across the country, prompting them to consider how to keep up with demand. But a larger yield means more challenges.

"Quality and quantity can easily deny each other, so in other words, to make sure that we don't achieve one at the expense of the other, we have a cardinal rule: volumes can increase if, and only if, quality also improves," says Deslauriers.

Benjamin Bridge aren't letting the buzz of wine writers and experts throw them off their goals, but they are looking at ways they can make the most of what the vineyard provides. "Over the years, we have accumulated a substantial amount of micro-cuvees, or wines made in quantities too small to commercialize conventionally. We frequently end up with grapes of distinct character, and although quantities are often small, we cannot, as terroir-driven individuals, justify losing that uniqueness in any way. Because we now have all these rarities kicking around, we just started a mailing list program to make these wines available to our customers." The mailing list won't be extensive, so interested parties should contact the winery for the ultimate wine score before the rest of the world barrels in, which may be sooner than you think.

Benjamin Bridge's Méthode Classique Rosé was chosen as one of two sparkling wines at the London 2012 Summer Olympics, something that Deslauriers hasn't let go to his head. "It would be easy to look at an endorsement like this and link it to our brand, but let's not forget that great wines are made in the vineyard, so this is a tribute to the terroir first and foremost," says Deslauriers. "I think it's yet another indication that there is great compatibility between our climatic conditions and sparkling production. This one goes out to our local industry, our potential as a region, our future."