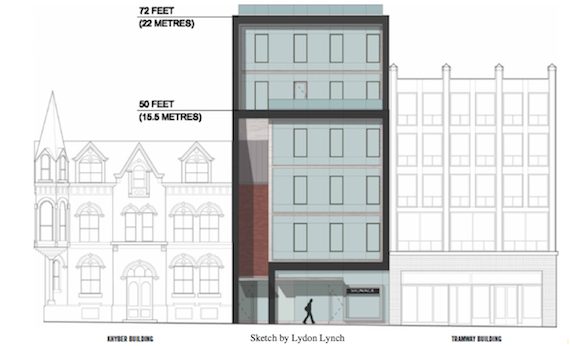 Besides the ferry issue, Halifax council had an unusually mundane meeting Tuesday. But council did discuss the potential demolition of the former Tip Top Tailor building at 1592 Barrington Street---the cubist-inspired structure sandwiched between the Tramway building (hosting Venus Envy and Obladee Wine Bar) and the Khyber. The building is in horrible condition, but is part of the Barrington Street Historic District, so its demolition must go through a public hearing process.

There is a development proposal for a new six-storey building at the site, designed by Lydon Lynch Architects. Members of Heritage Trust oppose demolition of the Tip Top, and so does Morris Strug, owner of the Tramway next door.

“First, there used to be a right-of-way down there, a big hallway. Secondly, it’s putting an office [building], covering all the windows in *my* office building,” says Strug. “They want to put a building right against my walls; if they want to leave the right-of-way out, it wouldn’t be so bad. But they’re going to cover up my building. It’s terrible.”

Strug owns considerable property in Halifax---he says he has “1,000 units for seniors,” has been in the business for 62 years and has built in Newfoundland, Montreal and Florida. “I’ve never had the problems I’ve had here,” he says. “Somebody has to have a little consideration; I had consideration when I was building my buildings---my next door neighbour was something I had to take into consideration. Here they just don’t care. They just get a permit and try to push it through---it’s not what you know, it’s who you know. That’s the way it works. It’s terrible.”

Council set a date of May 22 for the public hearing.