Dark days bring dark beer, find the light at the end of your pint with the latest local craft creations 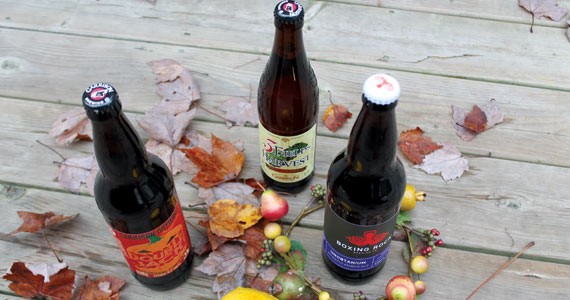 The leaves are crunchy, the air is musty and your proclivity for hibernation is now socially acceptable. As the days darken, so does the beer. But it also gets spicier, stronger and full-bodied. A few weeks from now, you won't need an excuse to stay inside, but this year's local brew harvest sure helps.

Propeller Pumpkin Ale (5 percent) ushered in fall with its spicy-not-sweetness this month, while Garrison tried on this most trendy of gourds, Imperial Style, with Double Jack (8 percent). Social media man Alex Pearson says if you can find Jack (the brewery's sold out), try it at room temperature, when it's most "fuckin' delicious."

But if you do trek over to Garrison, the "spicy rye flavour of victory" has arrived just in time for Hal-Con: Klingon Warnog Roggen Dunkel is available in 650ml bombers. (Pair with Heart of Targ.) Other seasonals available include Beau's collaboration Sweet Rye'D Harvest Wheat and wet-hopped favourite 3 Fields (6.3 percent). The weeks ahead welcome Martello Stout and Winter Warmer.

Up the street, November also sees the release of North Brewing Company's winter seasonal: Belgian Milk Stout (5.5 percent), with a smooth, warm-roasted malty character balanced by subtle Belgian yeast. This all on the heels of its popular, shandy-like Saison de l'Acadie (7.5 percent), a wine-beer hybrid brewed with Avondale Sky l'Acadie Blanc grape must, that "blurs the lines between wine and beer."

Downtown, Greg Nash is busy blowing minds at Rockbottom with the release of Ultimate White IPA, a cross between a Witbier and IPA, which he calls "hoppy orange deliciousness." Also, for the only local sour in town, check out Rhubarb Pi, a tart, barny lactose sour that'll fill your post-Halloween candy void.

Sunday, November 16 marks Stillwell's first anniversary. Primed for the terrible twos, the bar has conspired with Boxing Rock to commemorate this delicious milestone. The result is Merci Bière, an Imperial Smoked Saison. With a subtle, dry, smoked-malt character and a gravity of 8.4 percent, it will be the ultimate mashup (pun so intended) of a roasty winter beer and a spicy summer saison. What better way to celebrate the changing seasons? Keep an eye out for release-event details. More than a party favour, Merci Bière will be available in 650ml bottles at private stores. Look for the fancy label showing one hand jubilantly pouring a beer into a tulip glass held by another. The conceptual beer celebrates sharing within the industry. The idea was to release the brew as "our thank you to our customers and everyone who's been so supportive over the past year," says Laura MacDonald, one-third of Stillwell's holy trinity. And, as the name suggests, "it's also our thank-you to beer."

In the spirit of thanks, I'd like to extend my gratitude for Boxing Rock's brand-new Unobtanium (5 percent), a hop-forward "intrepid amber ale." My personal pick this season, the ridiculously smooth, layered ale is brewer Emily Tipton's "new favourite beer of all-time." Dry-hopped with the brewery's favourites, including the ultra-rare Nelson Sauvain, it's a one-shot deal, so grab some while you can. If you miss out, don't despair: December heralds the return of Boxing Rock's U-889 Russian Imperial Stout. a

Read our restaurant reviews at thecoast.ca/restaurants