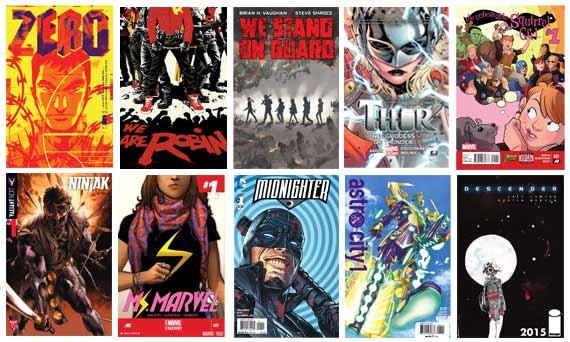 Astro City (Vertigo)
Writer/creator Kurt Busiek has been scripting his masterpiece anthology series for two decades, and if you've never read it then you've been missing out on one of the best comic books of all time. I'll say that again: of all time. Astro City explores every corner of its titular city and the worlds beyond through constant shifting of narrative focus, never lingering on one character or storyline for too long, giving the reader the unprecedented pleasure of never knowing which major or minor character's unique, layered perspective they'll be seeing next.

Ninjak (Valiant)
In under four years, Valiant has gone from being a long-dormant also-ran company to becoming a legitimate contender in the comics industry, attracting big-name talent like Jeff Lemire and Matt Kindt, signing a five-picture deal with Sony, and establishing a diverse range of quality shared-universe superhero books. Kindt's Ninjak is one of Valiant's best titles currently on the stands, following a former British intelligence officer's modern-day adventures as a purple-suited ninja assassin out for revenge. If you like action, wit and deftly handled, intricate narratives with a bit of a Batman/Daredevil vibe, this just might be the book for you.

The Unbeatable Squirrel Girl (Marvel)
It's incredibly difficult to out-charm Ms. Marvel but Squirrel Girl somehow manages to do that on a monthly basis. Squirrel Girl is nothing but charm, actually, focusing on college frosh Doreen Green's misadventures as she navigates the worlds of higher education, adult relationships, talking animals and fighting super-villains on the moon, with some great fine-print meta-commentary at the bottom of every page. Writer Ryan North has taken a one-note joke character and made her into one of Marvel's finest. There isn't a single book being produced today that is more of a delight to read.