That is, hot stax of wax. Vinyl. 45s. Another Coast top-ten list for your debating class. Plus: Chris Murphy and other old-schoolers share their favourite all-time Halifax singles.

(Murderecords), Mur 012, 1994. Try as they might, the band could not get sued by the estate of Wilf Carter (the artwork was inspired by Carter’s release of the same name). Tracks: “Come Clean”/“When They Paid Me”

(Cinnamon Toast), CT OO3, 1993. Release show from one of Halifax’s best power pop bands featured cinnamon toast being cooked in the back of the bar. Every time the toaster went down to make another order, the power went out. Tracks: “Glaze”, “Them”/“Cows,”“Mary”

(House Party Records), HPR 05, 2009. The first local release on House Party Records, this slab of vinyl from ex-members of Ermine and the Dean Malenkos sold out in months. Tracks: “Werewolf,” “Japanese Gameshow”/“Kick Gerry In The Junk,” “Murder At Pop Tate’s/Machete”

Piggy, Calypsos to Please You

(Cinnamon Toast), CT 021, 1999. Another Cinnamon Toast gem from the Calypso Orchestra of the Maritimes. Pink swirly vinyl, with great cover artwork by the late Scott Tappen of the Quahogs. Tracks: “Gottingen Street,” “The Person Behind The Counter”/ “Two Buddies”, “I Was Born To Please You”

(DayDream Records/Ant Records), DD002, ANT021, 1996. The release that kicked off math rock in Halifax. Participants went on to form the Plan, Instruments, Recyclone, North of America, The Holy Shroud and The Got To Get Got. Tracks: State Champs, “You’ll Love the Epcot Plams”/The Motes, “The New Physics/(Bhymia) Spy Museum”

(Murderecords), Mur 009, 1994. One of the first releases by the man who would go on to become better known as Buck 65. Artwork features the members of Thrush Hermit shot dead. A scrappy yet memorable single on maroon vinyl. Tracks: “Who You Frontin’ For”/“Chin Music” 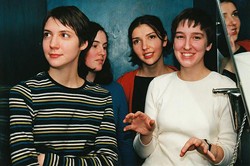 (PF Records), 1996. Before it was a Michael Cera movie, before it was a comic book, it was this Plumtree B-side from one of the Inbreds’ first releases after moving to Halifax. Tracks: Inbreds, “North Window”/Plumtree, “Scott Pilgrim”

…on recording the Thrush Hermit Ammo seven-inch: I think we recorded like eight or 10 songs at Aiden Sound Studios on Quinpool Road (Steve Comeau's old studio... formerly located above The Staff of Life). I got kicked out of the band shortly thereafter (also on Quinpool Road, coincidentally enough), so I don't really know the details of what happened after that when it came to releasing the stuff we had recorded. Most of the songs came out on a cassette called John Boomer that I think they self-released, and then one side of the tape became the Ammo seven-inchon Cinnamon Toast, and the other became the Marya seven-inch on something called Genius Records.

…on subsequently leaving the band: I remember that Joel [Plaskett] passed me my severance package in a plastic Sobeys bag with one copy of the tape and one copy of each seven-inch in it, at an all-city schools orchestra and choir concert in the St Pat's auditorium. I'm pretty sure we were both wearing grey flannel pants and acrylic V-neck sweaters.

Catano went on to play in the State Champs, North of America, The Plan and the Holy Shroud. He now lives in Chicago.

…on Murderecords: Murderecords was a (dreadful) name we made up to put on the artwork of our Peppermint EP. We supposed we needed to have a name for a label though there was no label at that point. We soon were signed to Geffen Records and we had some money to play with, so we decided to spend some of it promoting some of our friends’ bands.

My favourite (Murderecords single) is probably the Hardship Post seven-inch entitled Why Don’t You and I Smooth Things Over. The A-side was “Silver Suit,” which I loved and the B-side was called “Under The Influence of Meat Puppets II,” which I forget BUT the artwork consisted of sandpaper with the text stamped on with rubber stamps. Later pressings were done on silver paper. They were a pain in the ass to make but we were young and having fun.

…on how the Eric’s Trip/Sloan split seven-inch came about: I don’t remember exactly. I believe it was a benefit for CKDU in Halifax. It was a co-production with Murder and Cinnamon Toast and Sappy and maybe even one more label. I forget now. Our version of “Smother” was done with a drum loop that Jay made with reel-to-reel tape, which required that we hold a chopstick to keep it spinning. I think the drum loop was from the band Can. I don’t remember the song. I am happy this split seven-inch was made because Eric’s Trip are so legendary and great.

..on his favourite seven-inch that never happened: Matt Murphy (The Superfriendz), Jennifer Pierce (jale) and I recorded two songs that I thought we might make into a seven-inch but we never did. Is it too late?

…on working at Murderecords: I started to work at Murderecords because Sloan were managed by Chip Sutherland and Peter Rowan, then they split and Peter was the main guy behind Murderecords, so they asked me to step in. I had started Cinnamon Toast records with a bunch of my friends and the Sloan guys liked my work ethic.

…on his favourite Murderecords singles: The Hardship Post single was the biggest pain in the ass to put together--sandpaper!!!!, though Thrush Hermit was a close number two--but they were both awesome. I guess Hardship Post. That was such a great band and I am really happy that we actually recorded as much as we did, EP and single, and the C Toast single as well. Live they were definitely one of the best bands on the scene, Sebastian Lippa kicked serious ass.

…on the Sloan/Eric’s Trip split-single: The split was a Cinnamon Toast initiative and we just thought it made sense. It was probably our biggest seller. The folks at Cargo records in the UK went nuts for it (and) ordered all sorts and we were stuck stuffing seven-inch singles late into the night…many, many nights.

On seven-inches that never happened: I have a feeling that Chris really wanted to put out a seven-inch by Matthew Grimson but we never did.

…on the Glaze seven-inch: “We saved the money we made from playing shows (mostly at the Double Deuce) and decided to record some songs. At some point the Cinnamon Toast people got in touch with us and asked if we'd put it out on their label. I think this was before the recording. They said, “If you do the recording we'll do everything else including promotion.” Scott Tappen, the singer in the band, was in frequent contact with the Cinnamon Toast people, but we all knew Shawn Duggan and Walter [Forsyth].

Terry Pulliam did the recording at Soundmarket Recording. He was a big wacky hippy guy. He was always talking about this voodoo shit that was on the record. We never really knew what he was talking about. But he had lots of effects on his board, which really impressed us at the time. I don't think we were completely happy with the sound of the seven-inch when it came out. But then…maybe nobody is ever completely happy; especially back then when it was difficult to make a good quality record outside of a studio.

He fixed the intonation on my guitar (a shitty Hondo with one good pick-up), which was good. But it kinda sucked because we were paying so much money to be in the studio at the time.

The release of the record was at the Double Deuce. I can't remember who we were playing with, but it was a good time. I remember that the Cinnamon Toast people were making cinnamon toast in the back of the bar and every time they pushed down the toaster the power went out. We didn't know what was going on for a while. It caused some chaos.

…on how the Tongan Death Grip came out on House Party Records : After they [Tongan Death Grip] played the shows with Fear Of Lipstick and The Creeps we were all drunk and I told them I wanted to put a seven-inch out for them. Everyone kind of laughed it off at the time, but after seeing them a few more times I told them that I wanted to do it for real.

…on the record selling out in a matter of months: I wasn't surprised that it sold out so quickly, because they are a fucking ridiculously good band. My European distributor, P-Trash records wanted 100 right away, which was pretty exciting, but again not surprising, because everyone that hears them loves them. Upon hearing it for the first time Justin Maurer of Suspect Parts said they sound "like the Briefs, but with balls." From someone who plays in a fucking band with a guy from the Briefs, I'd say that is a pretty great review.

…on his favourite Halifax seven-inch : The Plan's “Ante The Essay b/w Give Me The Theory.” It would be purely for sentimental reasons [Hubley roadied for the band] if it weren't such a fucking great record. I bugged them for YEARS to play the B-side live, which I think is even better than the A-side, which is stellar on its own.

…on the seven-inch that should have happened, but never did: If The Boners had recorded three or four songs decently and really put everything into it, it would be among the most classic and sought-after Halifax punk rock records ever. They're of a sound from that era that was never really properly documented, and if that record existed, EVERYONE would be trying to find a copy today.

…on the release of the Super Friendz’s By Request: Chris Murphy played drums on “By Request,” and at the time Murder was also talking about putting out a full-length for us. The single was sort of a calling card for bands, give them a taste then put out the album. Novelty to boot.

…on infringing on Wilf Carter’s copyright with the artwork for By Request: Nothing from Wilf Carter's estate. Small fry. We couldn't even get sued back then.

…on the Inbreds’ move to Halifax and the split seven-inch with Plumtree: We had just moved to Halifax in May of 1996. We immediately started recording It's Sydney or the Bush at Laurence Currie's studio (with Lincoln Fong as engineer producer). We knew the album was coming in September and we were planning our first proper cross-Canada headlining tour. We usually did this kind of touring opening for others, but this time we got to pick.

Plumtree were friends from various shows and Halifax-related stuff we had been doing. They were working a new album too and “Scott Pilgrim” was one their new best songs. They ended up using an early version than the one that appeared on their album. We used an early mix of “North Window,” but it sounds pretty much like the album.

The album art was hand-screened by our friend Jenny San Martin. Every copy was different and original.

We put it out on our label PF records, which we used for all early tapes, CDs, etc. We sold it at shows and via mail order.

Note: Ullrich thought his website, zunior.com, featured a digitized version of the split seven-inch, but after answering these questions, he realized it hadn’t been converted. He plans to have the seven-inch available for download this week.)

We asked you to pick your all-time favourite Halifax songs. Many of you can’t resist the beer-swilling lure of Stan Rogers’ “Barrett’s Privateers.” No big surprise that Joel Plaskett’s “Love This Town” ranks up there. “Been Waiting” by The Flashing Lights, Matt Mays & El Torpedo’s “City Of Lakes,” The Inbreds’ “Yelverton Hill” and Jenn Grant’s “Dreamer” all received nods too.