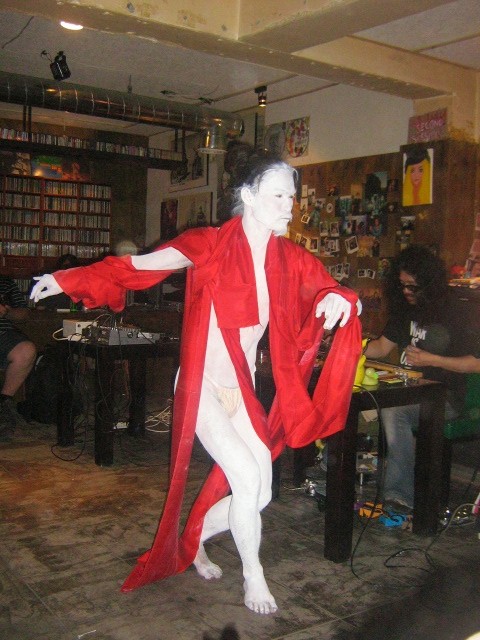 Last Sunday (May 29) South Korean noise fans got a wee taste of Halifax when Torso (aka Sandy Saunders) played a show at a bar called Strange Fruit (love that) in Seoul (he was in the city to visit some friends). He was joined on the bill by Sato Yukie, a fellow noise musician also based in Seoul.

Yukie also runs a noise night called Bulgasari, described on his website, and rather than paraphrase it, I thought I would re-post it in its entirety here. It's pretty wonderful - and in my mind it's a very accurate and honest summation of why any musician seeks to reach new audiences.

"'Bulgasari' is small live concert that Yukie Sato, who lives in Seoul, plans and holds. In Korea we could not find any underground scene of improvised music, noise music, and so on...And here are no shops that sell CDs & records of that kind of music now. It is important cause people have no chance to listen to that kind of music, and musicians and artists have no chance to play.

I thought..truly are here no musicians? There must be potential artists, must not? Of course, we, a few improvisers in Korea, have no place to play here. And I wanted to find new generation, new young artists. So I have started live series of 'Bulgasari'. I want to make some special stages beyond genres, not jazz, not rock, not academic...Don't you want to listen to the music nobody heard before?"

Yukie was accompanied by a Butoh dancer from Japan named Kinki Iori (pictured above.) Coast contributor Mark Black is currently teaching in Korea - he organized the show and kindly sent us a few pics, pasted below. Scroll to the bottom for a video of Torso's performance.