A couple of day-trips to Peggy’s Cove’s The Sou’Wester, and Indian Harbour’s Ryer’s Lobster prove that playing tourist isn’t such a bad thing. 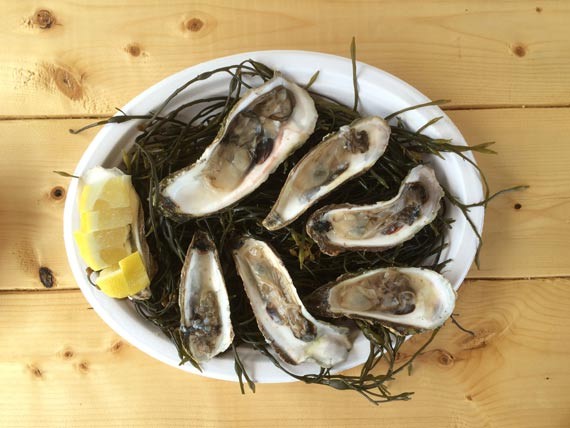 Live shellfish is available to stay or go at Ryer, “basically a garage full of lobsters.”

It seems, at times, like the perception of authenticity in Nova Scotia can be as hard to grasp as the overpriced cloud of steam wafting up from a freshly cooked lobster.

It's summer, you guys. Find a lobster, eat that lobster, enjoy that lobster. Go find a bowl of chowder. Eat some scallops. Boil, steam, grill. Enjoy Nova Scotia. The only thing that needs to be authentic is your enjoyment.

The deck can constantly feel stacked against us here. Food is an ace up our collective sleeves. From church socials and community dinners, to clambakes and lobster feasts, summer eating in Nova Scotia is a wealth. We put that wealth on display for tourists. So here's an idea: be a tourist.

The rocky shore of St. Margarets Bay is perhaps the easiest staycation imaginable for Haligonians—it's barely a daycation. Not even an hour out of the city and the landscape turns almost prehistoric, a lushly barren tumble of huge rocks and jagged trees, an assault of waves that crash against drifts of solid granite.

When a bagpiper shows up on the path to the lighthouse, when seagulls swoop and glide in the air, when you see a turquoise house or your coat flaps in the ever-present sea breeze, you can't help but feel Maritime.

That's why the tourists come.

Peggys Cove crawls with visitors. The souvenir shop in The Sou'Wester is crammed with people browsing their baubles and trinkets. Not quite noon when we enter, the restaurant is still relatively empty. By the time we order, a table for 20-something comes in, and the room starts to crowd.

The restaurant is cute, steeped in fisher frippery—a captain's wheel, carved ducks, ship lanterns. The dining room is sprawling, almost floor-to-ceiling wood, with hand-carved ceilings that date to its opening in 1967. It's a perfectly baited tourist trap.

The food is, across the board, quite good. The seafood chowder ($7.99) is thick without being gluey. It's teeming with chunks of tender haddock and buttery lobster, the soft cubes of potato just starting to melt into the paprika-dusted broth. It's served with airy, flaky, fresh-baked rolls.

The Greek salad ($8.99), a huge bowl full of crisp, fresh vegetables with a light dressing, isn't memorable, but is more than serviceable. The mussels with garlic butter ($8.99) are fresh and plump, steamed perfectly.

The fish hash ($10.99) is more of a mash: I expect it to be browned with some crispiness—a sort of deconstructed fish cake—but it's three ice cream scoops of mashed potatoes with salt fish mixed in. The flavours are classic, though, especially with a dollop of sweet, tart green-tomato chow. The accompanying beans are big, sweet baked Jacob's Cattle beans; it tastes a lot like Marie Nightingale's old recipe, a gold standard for deep flavour that balances savoury nuttiness deftly against the dark sweetness of molasses.

Fat Digby scallops ($18.99) are lightly breaded and fried a beautiful golden brown. They are served with floppy steak fries and a little tub of wan coleslaw. While it's a nice pile of scallops, the price tag is high for the overall quality of the platter. This is where the problem with tourist fare is obvious: price and quality don't have a consistent relationship. 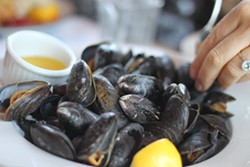 The mussels are perfectly steamed, fresh and plump—with garlic butter!—at the Sou’Wester.

Down the road in Indian Harbour, Ryer Lobsters isn't a restaurant, exactly. It's not quite a warehouse, and not quite a fish shack. It's basically a garage full of lobsters.

A scattering of colourful picnic tables surrounds the small parking lot, with a few more on a small deck that overlooks the bay. Inside is very open with a long counter that has the cash register at one end and a gal shucking oysters at the other. Behind it, a bunch of tanks in a row, lobsters churning inside.

Ryer's has lobsters, mussels and oysters for sale: you can buy live shellfish to go or eat on-site. The eat-in menu is pretty simple: one- pound to three-pound lobsters for between $14 and $45, six oysters on the half-shell—raw or steamed—for $10 and steamed mussels for $3.50 per pound.

When we arrive, the line is about a dozen people deep. The couple in front of us are tourists, excited to get a fresh lobster. They are treated to my favourite kind of Nova Scotia hospitality when they get to the counter and, instead of ordering, instead ask "what's the best size?" only to be greeted with immediate exasperation.

"I don't know. How much lobster do you want to eat?" It's a great answer to a question with no good answer. "You tell me. Do you like small lobsters or do you like big lobsters?" I am in love with this woman.

Eventually, after she has internally eye-rolled as much as a person possibly can, she gets a couple of small lobsters for the people to look at and compare. The lobsters, within a half-pound of one another, wobble around the counter, futilely waving their banded claws. They pick one with an outstretched claw, as if it's raising a hand to get picked, finally satisfied in their experience

As the orders are given, the cook reaches into the tanks with his big blue rubber gloves and plucks out the lobsters, tossing them into the boil. When ready, he pulls out the bright red lobsters, steam billowing off of them, and tosses them into a cold sea water bath before cutting them up with lobster shears and serving them up, ready to eat.

I order oysters, a pound of mussels and a one-and-a-quarter pound lobster without questions. I'm no dummy. We're sent out with paper plates, lobster bibs, plastic cutlery—which includes a lobster pick—and an entire roll of paper towels.

We slide into the covered patio, the heady breeze from the bay tinged with salt. It is, frankly, a little too breezy on the patio. The paper plates have to be weighted or they blow away.

The oysters are plated on a bed of seaweed, with one of the half-shells filled with tiny lemon wedges. They are big and briny, a bargain.

The mussels and lobster are both served in paper-lined, plastic fish boxes. It's unconventional in its embrace of the customary, plating so ordinary that it's actually out of the ordinary. You can't help but be charmed by it. The shellfish is all steamed to perfection, a butter-drenched mess when we're done, a quarter of a roll of paper towel later.

This was my first lobster of the summer. Eating it in the June sunshine, it finally felt like summer. It tasted like Nova Scotia. Authentically.

Going deep in the shallows with Gilbert van Ryckevorsel

By Allison Saunders and Melissa Buote

Two Planks and 25 years of passion