The waterfront is now home to Tall Ships-sized events, and a major construction site. Adding a sea bridge aims to keep the crowds coming. 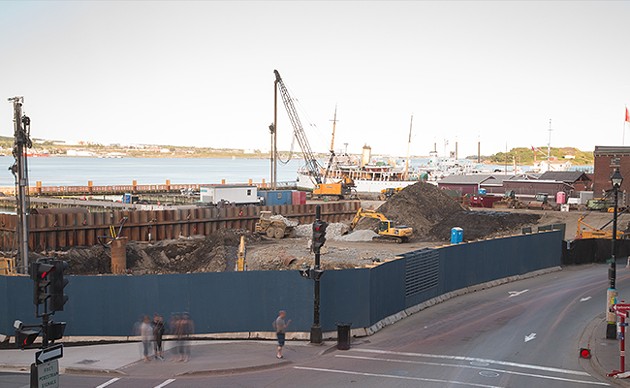 Business on the boardwalk got off to a rocky start this season.

The Queen's Marque construction site— a $200-million, development slated to be finished in 2019—has disrupted the walk along the waterfront as crowds descend on Halifax Harbour for events like the Canada 150 festivities, the Tall Ships Regatta and the Halifax International Busker festival this summer.

Several vendors are struggling to make up for lost business after their openings were delayed as they were being moved to newly concentrated business areas, while others saw foot traffic diverted away from their establishments and onto the bottlenecked downtown streets. Some workers complained that the project, which is replacing the parking lot between Prince Street and George Street, has prolonged their morning drives while cars circle around the area in search of a free space.

Jennifer Angel, acting president and CEO of Waterfront Development, says the Crown corporation tracks its tenants' sales, and while it's too early to say how the construction has their bottom lines, she expects a drop off in early season revenues compared to previous years.

"We certainly heard from some businesses that there was an impact on sales early in the spring," Angel says. "Our hope is that by investing in this enhanced new space and a lot of events in the summer...that we'll be able to recover and hopefully have a stronger summer."

Angel hopes profits will turn around thanks to the debut of a more than 150 metre-long floating sea bridge linking the Maritime Museum of the Atlantic's docks and Cable Wharf. She says thousands of people have strolled across the shifting dock, which cost roughly $850,000 to build, since it opened in early July—about two months behind schedule, according to a provincial tender.

"The sea bridge itself has become a bit of an attraction," Terri McCulloch, a spokesperson for Murphy's the Cable Wharf and Ambassatours, says. "It essentially delivers people right to our door at this point...so we've been pleased to see that that's been an improvement in getting folks back on the boardwalk instead of on the street."

McCulloch says Murphy's has had to shift its operations, which had been centred near Cable Wharf, across the boardwalk, even building a few new kiosks for services that have been displaced by the construction.

She says the sea bridge has eased congestion on Lower Water Street to the delight of business owners and commuters in the area.

On the other side of the sea bridge, Kara Hyland of the Marine Heritage Store says business has recently picked up following a few lean months earlier in the summer.

"The [sea bridge] was all the difference in the world, because before they just had signs saying that the boardwalk was closed, so people would see that and just immediately go to the street," says Hyland. "They didn't really pick the greatest year with Tall Ships and [Canada] 150. So that probably could have been planned better, but I see that they are trying to rectify the situation and do everything they can to encourage people to come down."

Amy Richardson, at Waterfront Pizza and Wraps, says she thinks the kiosk's relocation has brought in new but has also led to confusion for local customers who can no longer find their favourite snack shack.

Keegan Blue, who works at High Seas Taffy and Teas, says the sea bridge has made the cluster of shacks farther down the boardwalk more but adds that the cross- water commute can make some people seasick.

Blue says the clamour of construction has disturbed the waterfront scenery, and if the project proceeds as planned, will continue to do so for at least the next two summers.

"When tours come, people want to see the nice boardwalk in Halifax, and now it's just gross construction," Blue says. "People think that everything's closed because everything was on the boardwalk, but we're still here."