Trudeau offers platitudes but no promises on Abdoul Abdi's case 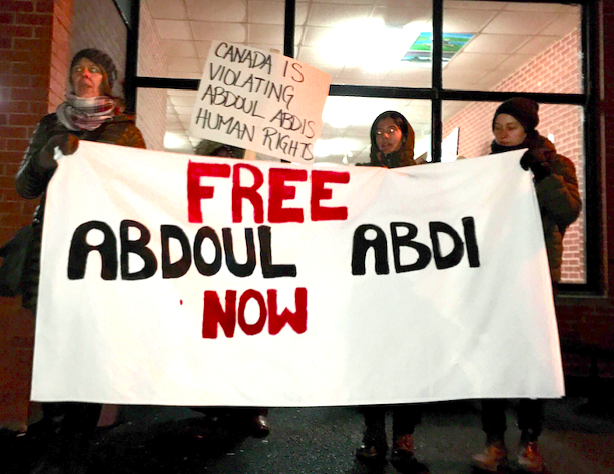 The protesters aimed their cries at the sprawling line waiting to attend prime minister Justin Trudeau’s town hall event in hopes of raising awareness about the deportation case of Somalian refugee Abdoul Abdi.

Abdi came to Nova Scotia with his sister and two aunts as a refugee at age six. Less than a year later he and his sister were seized from their aunt, who spoke little English at the time, by Children’s Services. Abdi became a ward of the state by age nine.

“She wasn’t able to explain herself,” activist El Jones, who organized this week’s protest, says about Abdi’s aunt. “There was just this assumption that here’s this African woman and she must be abusing and neglecting the kids.”

Now Abdi, who is 23 years old and has a Canadian-born daughter, is being held in solitary confinement at an immigration detention centre after finishing a four-year sentence for aggravated assault. As a permanent resident with a criminal record, he’s facing deportation to Somalia.

Abdi’s lack of citizenship, however, is a responsibility that should have fallen on Nova Scotia’s of Community Services. In his 18 years of state care, Abdi lived in over 20 foster homes and suffered abuse at the hands of foster families. Neither he nor his sister able to apply for citizenship because no policy is currently in place to grant Canadian citizenship to children in care.

“No one told us that,” says sister, Fatouma Abdi. “They just basically waited until we outgrew the system and booted us out.”

Because the state failed to apply for citizenship for Abdoul, his lawyer Benjamin Perryman says the government is in violation of international human rights law.

Fatouma Abdi attended the prime minister’s town hall on Tuesday to ask Trudeau why her brother was facing deportation.

“Why are you deporting my brother?” Abdi asked the prime minister. “If it was your son, would you do anything to stop this?”

Trudeau never responded to the second half of Fatouma’s but did thank her and protesters for rallying behind her brother’s story.

“I think I speak for most of us in this room and indeed across the country, I say, when we saw how the care system failed your brother; we saw the how the challenges he’s facing have impacted upon him; we saw the real challenges that we’re facing in the system,” said Trudeau, right before defending the ‘rules and principles’ of the very same system.

Ultimately, Trudeau declined to comment on specifics of the case, citing privacy law, and gave Fatouma no assurances except a promise to “try to do the right thing based on both rules and compassion.”

Abdi’s family, however, is looking for more. His supporters have brought the case before MPs, and Jones presented it to the minister of Immigration—himself a Somalian refugee—but the family has received no response.

Jones says that Abdi’s deportation case has not taken the failures of the foster care system into proper consideration. Black and Indigenous youth are vastly overrepresented in child care, and children raised in foster care are disproportionately incarcerated.

“People use things like the number of contacts he’s had with the law to prove that he’s some kind of unrepentant criminal without looking at the fact that a Black kid in care is going to have those contacts.”

Now, with the threat of being deported to Somalia, a country with a standing travel advisory warning, family fears for his life.

“My brother messed up, we all know that,” says Fatouma. “But now they’re basically trying to have Abdoul in a death penalty sentence. My brother Abdoul does not know [Somalian] culture, he does not know the language. He’s been here since the age of six.”

Abdi’s family and other organizers are encouraging concerned individuals to lobby their MPs, and the ministers of immigration and public safety.

“I just hope that they listen,” says Fatouma, “and whoever has the power to stop this, stops it.”