Miles Howe was arrested at the Occupy Nova Scotia eviction, then again the next day. 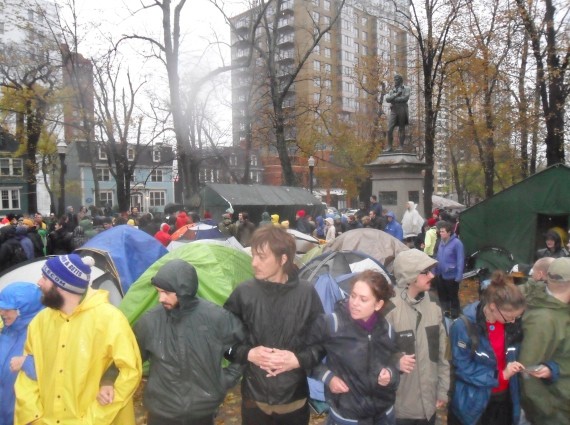 On November 11, the Halifax Regional Police department served notices of eviction to Occupy Nova Scotia, then encamped at Victoria Park. Word of the eviction spread among Occupiers and supporters via telephone and email; I got the message and headed down to the park. When I arrived I found an extremely agitated community, already surrounded by several police vans filled with officers in orange rain gear. Nobody knew what was happening, only that things were quickly coming to a head.

At about 1:30pm, police were given the signal to begin taking down the tents. There was no communication to the Occupiers as to what was happening, where people’s shelter and belongings were being taken or how they might retrieve them. All around, we were witnessing police stuffing tents and belongings into garbage backs, and throwing them helter-skelter into a trailer.

A group of us found ourselves lying on a tent that police wanted to dismantle. Police told us to move. Very quickly, and being blocked in by a line of officers to our front and a wall of media cameras and Occupiers to our rear, pandemonium ensued. I saw people being dragged and chocked before I too was seized, cuffed behind my back and dragged through the mud. I was then thrown to the street before being driven off in a police van.

At the police station, after sitting wet in a cell for five hours, I was read my rights and processed. Occupiers were placed two to an eight-foot by five-foot cell. We begged for blankets, while some police laughed at our discomfort. After seven more hours of waiting, at 2:30am, I was presented with a conditional release. The conditions were that I would not go to any municipal, provincial or federal park within the HRM. Now sick and feverish, I signed the form and was released.

The next day, I returned to Grand Parade, in violation of the conditions I had signed the night before. I ripped up my conditions in front of about 40 police officers, and invited them to arrest me again. Rather than immediately arrest me, they waited until I had left Grand Parade, and on the Citadel Hill, in the company of maybe 50 eye-witnesses, viciously gang-tackled me from behind and drove me into the ground---even though I had no criminal record, I was known to have no violent history and they did not ask me to stop before attacking me. They then dragged me down the Citadel face-first holding me up by the chain between my handcuffed hands. I screamed out in pain several times, and the police did nothing. Footage on Youtube shows the officers laughing, calling me a “fucking pussy.”

I was reprocessed, this time for a “Breach of Conditions,” and spent the weekend at Burnside Correctional Facility. Fortunately, news of Occupy Nova Scotia had spread through the concrete walls of North Block 3, and I was well-received by my fellow inmates and treated like family. Indeed, when the corrections officers came to enforce the 11pm lock-down Sunday evening, my cellmates erupted into cheers of “Occupy Burnside! Occupy Burnside!”

I will be pleading not guilty to all of my charges, and will be filling complaints against the November 11 arrest, my overly-long incarceration period in soaking clothes, as well as my re-arrest November 12.