How a poor old motel owner was victimized twice: once by the mayor, and once by the city bureaucracy. 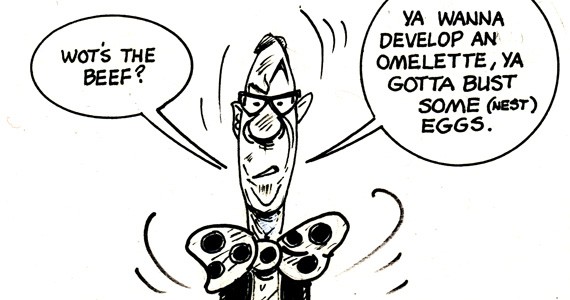 You've heard how Halifax mayor Peter Kelly betrayed the trust of of a family friend. What you haven't heard is how city hall doubly abused the same woman, forcing her to live out her final days in poverty.

On February 16, The Coast published my expose of Halifax mayor Peter Kelly's failure, as executor, to properly resolve an estate of his friend Mary Thibeault, who died in 2004 at the age of 92. Kelly, I documented, had removed over $160,000 from Thibeault's personal bank account.

A week after the article was published, Kelly announced he would not run for re-election in October. It's been over two months since the article ran--- and seven years, four months and 19 days since Thibeault died---and still the estate remains unresolved.

Unfortunately, Kelly's bethaviour after Thibeault's death mirrors the way city hall treated her while she was alive.

Thibeault was owner of the Princes Lodge Motel, which she and her husband had purchased in 1945. The motel sat on about nine acres next to the Bedford Highway, just north of the Rotunda.

In the 1970s, the former city of Halifax began putting zoning encumbrances on the property. At the time, the city was buying up land and piecing together Hemlock Ravine Park, which sits immediately behind, to the west of, Thibeault's property. In order to protect the new park, the western three-and-a-half acres of Thibeault's property were zoned Park and Institutional. This sort of zoning of private property would not be allowed now---the city would now have to buy the property outright if it wanted to use it for park purposes---but at the time it meant Thibeault owned the property, but had no legal right to develop it.

Additionally, a strip of about two acres along the sourthern edge of Thibeault's property was zoned R-1, which allows development of only single-family detached houses. The remainder of the property, the northeast section where the motel was located, was zoned Commercial, which brings the highest potential development value, and allows for high-density apartments.

Thibeault began trying to sell her property in 1988, when she was 77 years old, but found the zoning encumbrances interfered with a sale---potential buyers wanted to develop the entire property, but the zoning prevented that.

Thibeault's lawyer, Lloyd Robbins, argued the Park zoning amounted to "expropriation without compensation," and said the city should either buy the property or re-zone it all as Commercial. "The zoning is preventing [Thibeault] from selling the property," wrote Robbins. "She is in her 80s and while she may be land rich, she is not well off. Every year she runs the motel during the summer and makes little more than enough to pay city taxes. This is an intolerable situation."

But city officials were adamant: the property would not be re-zoned under any circumstances. Over 10 long years bureaucrats repeatedly, in writing, told Thibeault a re-zone was impossible. So in 1998, she sold the property to developers Nassim and Solomon Ghosn for the fire sale price of $600,000---money which became the estate that Kelly would later control.

By law, re-zoning property requires a public hearing before city council, but no such hearing has ever been held. Still, in 2000 the city issued the Ghosns a building permit, and they began constructing the first of three apartment buildings.

When neighbours complained, the city issued a stop work order on July 28, 2000, saying that the construction violated zoning. But then, just just a week later that order was lifted, with the zoning problems miraculously resolved---without a public hearing, and without an act of city council.

The same city bureaucracy that said Thibeault's property would never be re-zoned had re-zoned the property with a wave of the hand when it was owned by the Ghosns. Staff had no legal right to change the zoning without council action.

I've posted a detailed account of the history of Thibeault's property, including correspondence between city officials and Thibeault and zoning maps, here

But the short story is this: Because of the zoning encumbrances on her property, Thibeault lived out her last decade in poverty, working at the motel well into her 80s to just barely cover her tax bill. The Ghosns will have no such worry, however. Thanks in part to the re-zoning, their property is assessed at $20.8 million.