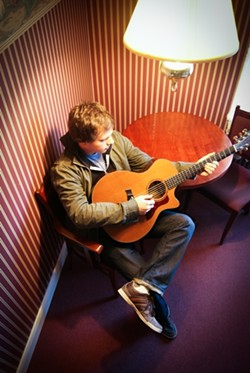 A big tip of the hat to Tyler Shea of Louisdale, Cape Breton who crooned his way through almost 1000 other musicians in Taylor Guitar's "Test Drive Electric" contest.

The payout for first place was a Taylor SolidBody electric guitar, free studio time, a Crybaby Wah pedal, Dunlap picks, Elixir strings and cables ... And a slot at Milwaukee's "Summerfest," toted as "The World's Largest Muscial Festival." Not bad, Bud.

Tyler's been at it for a while. He was 12 when he started playing. His conviction and respect for melody and songwriting has helped set him apart from a lot of solo acoustic players. Shea out shined predominately electric opponents to take top honors. Pretty killer. Check him out at tylershea.com for tunes, pics 'n more.