Some of the women quoted in the Project Sunshine reports are worried a third-party investigation by Wickwire Holm isn't as independent as it's being portrayed.

Red flags are waving for two women whose stories are in the Buddhism Project Sunshine reports, and for the retired lawyer who carried out the investigations into allegations of abuse and sexual assault from Shambhala Buddhism’s spiritual leader, Osel Mukpo, known as Sakyong Mipham Rinpoche.

All three are asking questions about what Shambhala International calls an “independent third-party investigation” by Halifax law firm Wickwire Holm.

Patricia Ullman, whose story is in the first Project Sunshine report, wants to know everything from who the firm’s client is—given the entire governing Kalapa Council has stepped down while a transition team selects an interim board—to whether Wickwire Holm has attorney-client privilege with Shambhala.

What will happen to the information gathered? Will it be disseminated? Not to mention, who’s paying for it?

“Which is probably all the students,” Ullman guesses.

In the second of two already published Project Sunshine reports, retired lawyer and researcher Carol Merchasin called for an independent, third-party investigation. In the weeks after the June 28 report dropped, the Kalapa Council announced it had engaged Wickwire Holm to carry out an investigation into the allegations.

This past Saturday, the outgoing Kalapa Council sent an email update to members of the Shambhala community responding to questions about that investigation.

“Our firm has not been retained to represent the interests of Shambhala USA,
Sakyong Mipham Rinpoche or any other senior ” writes Wickwire Holm lawyer Selina Bath. “We do not represent any one individual involved. Our role is to gather and analyze information to provide a clear and objective report of our findings.”

Hours before the outgoing Kalapa Council announced the Wickwire Holm investigation, a woman whose story is contained in the second Project Sunshine report says she received a voicemail from Bath, who said she’d been asked to get in touch. The woman did not return the call. Bath went on vacation later that and was out of the office until August 8. On Friday, August 10, the woman received a letter from Wickwire Holm asking her to provide a written summary of her allegation and submit to an interview with Bath. The letter also instructs her not to “discuss the content of the allegation with anyone, including any other claimants or potential witnesses while the investigation is ongoing.”

This letter—which its addressee received by email and which The Coast has read—raises a number of red flags for its recipient. Her story was anonymously reported in the Sunshine report, (likewise, her identity is being protected by The Coast), which leaves her wondering how the law firm got her name, phone number and email address. Neither was released by Project Sunshine’s team members. She also baulks at the idea of being commanded to give an interview and write a summary.

The letter goes on to note that after the investigation, Bath will report her “findings to Shambhala. Shambhala will take the action that it determines is appropriate, which might include releasing part or all of the investigation report.”

“Survivors should not need to keep labouring for the organization’s benefit when it and their perpetrators have shown little interest and no capacity to change, and while the majority of the community continues to show disregard for the impacts of sexual violence and women in nearly the same ways it always has,” the woman says via email. “All are sacrificed in the name of Shambhala, enlightenment, the lineage, the teachings, the community, the teacher.”

She wonders why Wickwire Holm is so keen to talk to her, as it appears the other women who were interviewed by Merchasin were not contacted. “I am curious if this is because their experiences may not pose the potential legal threat that a claim from me would, due to varying sexual assault laws.”

She also questions the letter’s instructions that she not speak about her assault to anyone else, including potential witnesses, or other survivors. “If there was any remaining doubt, the letter made clear who this investigation is intended to benefit and who it privileges—this is not the people who have been injured.”

According to the update sent the next day to everyone in the Shambhala community, the final report will be given to the interim board of directors.

Wickwire Holm will not make the results of the investigation public, but the Kalapa Council will recommend that the full results be made available to Shambhalians.

Wickwire Holm and Shambhala International declined to be interviewed for this story. 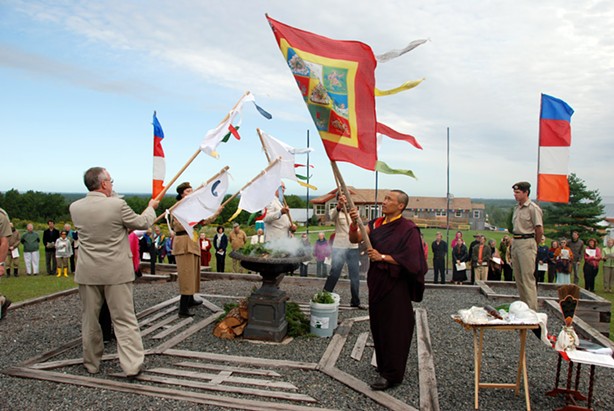 PATRICIA ULLMAN
A purification ceremony before a program at Dorje Denma Ling.
In view, there are examples of genuine third-party investigations in the news these days. In Chicago, recently, a parishioner and several staffers accused a powerful mega-church minister of assault and abuse. The church convened an advisory panel of “external Christian leaders from across the United States,” to oversee the investigation, which, the New York Times reports, is being paid for by a single anonymous donor.

Shambhala, she says, could have considered a similar route. “That’s what I think should have happened here. Because it’s led, unfortunately, to a lot more questions than answers.”

The reason Merchasin called for an independent third-party investigation in the first place is was unable to interview the or any of the accused senior teachers and community members during her research for Project Sunshine.

“Even as a retired lawyer,” she notes, “it’s very difficult to come to a conclusion about what has happened when you don’t have both sides of the story.”

She felt it would only be fair for “the and others within Shambhala who had been accused of being complicit to be able to tell their side.”

She thought Shambhala International would investigate the claims from those reports that the governing body and the were disputing. But the disputations never came.

“If they believe a claim is true, largely, then there’s no point in investigating it,” she says. “We haven’t seen any denial of the basic allegations, so that’s one thing.

Are there some of these claims that the is saying, ‘Well, you know, that’s true? You don’t need to investigate that one?’ We don’t know that yet,” Merchasin says. “There’s not a lot of sense of trust in the process that’s been laid out here.”

Ullman also wonders about the scope of the investigation, and whether it will include all the claims brought forward in the Sunshine reports—and any others that might arise.

A longtime follower of Mukpo’s father, Chogyam Trungpa Rinpoche, Ullman has been active in Shambhala since the 1970s. She was the current math tutor when he was young and later became one of his secretaries. She travelled with him often, and the two became close.

Eventually, she returned to Nova Scotia and was appointed director of Dorje Denma Ling, Shambhala International’s rural retreat centre in Tatamagouche. She served in that role from 2005 to 2012, when her abusive marriage broke up and her community was either unable or unwilling to help her.

These days, Ullman finds herself on the outside, asking questions with answers that don’t come. Some of the many friends she made in Shambhala “get it,” Ullman says, but many others “just don’t talk much about this...Others consider me disloyal or damaging to the organization.”

As Ullman read other stories in the Project Sunshine and the letters the Kalapa Council was sending to the community, she began to feel “like it was just the same old.” A feeling of “institutional betrayal.” It wasn’t about the victim’s stories. It was about preserving the organization.

“Let Shambhala be a shining example of how to do research, and show everyone how to work with sexual abuse in a spiritual organization.” She sighs. “No. They weren’t interested in that.”

Merchasin says she was able to speak with WH lawyer Will Russell by phone, and though the conversation was brief, she feels confident in the law firm’s integrity.

“The lawyers really don’t have any reason to not do a good job. Even though they may have been hired by the .”

Though official answers remain in short supply, for now, Ullman still feels those answers are worth pushing for.

“It’s this whole process of awakening to what’s not OK, which is very painful because you’ve been told that it’s not OK to think that way for so long. That it will harm this beloved organization.”

She pauses for a moment.

“I say people like me and these other people who are speaking up, they’re the most loyal of because they want the organization not to be rotten from the inside. They want it to be real and walk the talk.”

A third Project Sunshine report is due to be published August 23. Its author, Andrea Winn, says the contents of that investigation will make it difficult for Mukpo to ever return to lead his spiritual community and associated business interests.