Former Haligonian does not qualify for the Danuta Gleed Literary Award. 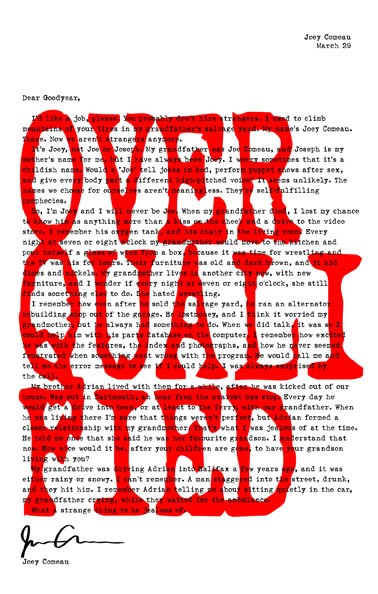 ED. UPDATE: Apparently ECW Press has voluntarily withdrawn Comeau's Overqualified from the 2009 Danuta Gleed Literary Award for, well, being overqualified—the award is for first collections and Comeau’s self-published his collection of short stories It’s Too Late to Say I’m Sorry in 2007.

***
Former Coast contributor (remember A Softer World?) Joey Comeau was shortlisted for the $10,000 Danuta Gleed Literary Award, given to an author for their debut collection of short stories, published the previous year. Comeau's Overqualified (ECW Press) is a series of job application letters that reveal much more than you'd ever expect. Comeau, who now lives in Toronto, is up against BC writers Deborah Willis (Vanishing and Other Stories, Penguin Canada) and Sarah Roberts (Wax Boats, Caitlin Press). The winner is announced on June 5.

Congratulate Comeau next Thursday for the Halifax launch of his new novel One Bloody Thing After Another, at Strange Adventures.