There was no cash advanced without city approval, it was just sloppy paperwork says spokesperson.

March 28, 2011
After publishing today's article showing a discrepancy between the reported date of a Trade Centre Limited loan to Power Promotions and the date of the the city's authorization for that loan, a spokesperson for TCL finally contacted The Coast to give their version of events.

Suzanne Fougere acknowledged that The Coast followed all reporting protocols---we attempted to contact both TCL's controller, Robert Kanchuk, who refused to comment, and Fougere. Fougere did not answer her office phone, and her message directed reporters to call her cell phone. The Coast dutifully called the cell number, and left a message; three hours went by without a return call before The Coast decided to publish the article.

Fougere's excuse for not returning the call? "I left my cell phone at home," she says.

In any event, Fougere says the June 4, 2010 loan date reported to the city on Attachment C was simply a "typo," a mistake. Remarkably, TCL was responding to a Freedom of Information request from the city involving an accounting scandal that would embroil City Hall and cost at least one person their job, but TCL officials managed to get the dates wrong, and coincidentally leave the date off the notes to the wrong date as well.

Fougere forwarded a copy of the loan cheque to prove here case: 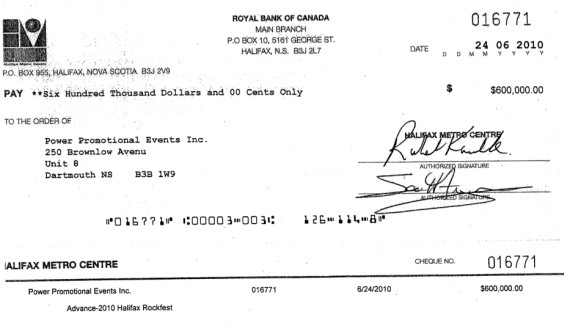 So, to be clear: Trade Centre did not advance the $600,000 loan without authorization from Wayne Anstey.

Still, this sloppiness with dates characterizes the entire loan fiasco. Loan authorizations were made via email and fax, on the fly, sometimes with signed contracts, sometimes not. One of the signed agreements, the final one, references the "2010 County Rocks concert"---"county" not "country," and the concert in question was actually the Halifax Rocks concert and not the Country Rocks concert.

The $359,550 that was not repaid to the city comes via a contract signed by Edgar Goguen of Arrow Construction as guarantor---but Goguen's name is misspelled. The city has said there is no chance of recovering the money, but why not go after Goguen? Perhaps the contract is so sloppily constructed that it's unenforceable.

Again, contrary to the document trail that TCL itself produced, TCL did not issue the $600,000 to Power Promotions before being directed to do so by Anstey. But be that as it may, is it really conceivable that an organization that regularly deals with millions of dollars in contracts, and which carefully watches Halifax city council in action, did not know that the transfer of Metro Centre funds was against city policy? And if TCL officials did know the transfers violated policy, weren't they obligated to report the violation to city officials?