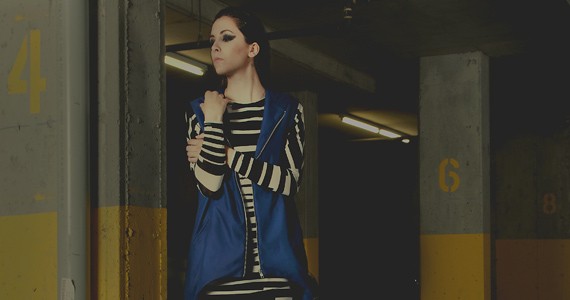 Mitchell Stuart Gilroy is a reluctant designer. His first love was architecture, something he attributes to a childhood love of Lego. "Once I actually began studying architecture, I quickly realized it wasn't for me," Gilroy says. "The philosophy behind the building was too far-fetched for me. I appreciated the utilitarian side of design." From a childhood spent dreaming of design and a desire to make multi-purposed, functional objects, came his eventual entry into the world of fashion.

Gilroy began working at Banana Republic, where he fostered a love of marketing fashion. He loved to sell clothes. "This is what brought me to school for fashion---I wanted to market fashion and learn the business side. When I started studying at the Centre for Arts and Technology in 2010, I had no interest in designing."

But the draw of putting pieces of clothing together like Lego was just too alluring and his talent betrayed him. "I caught on to the construction of clothing very quickly. After six months in the program, I had people urging me to be a designer. To this day, I don't really consider myself a designer and I don't know if I want to pursue design after I graduate. Making clothing is incredibly hard, but enjoyable, work, however, I don't know if I want this to be my career."

While attending classes at the Centre for Arts and Technology's Fashion Design and Merchandising program in February, Gilroy competed as a finalist and won a spot in the top five of Télio's Canada's Breakthrough Designer Competition at Montreal Fashion Week, winning the Technical Quality Award for his garment, a red dress-jacket hybrid that can be worn in a multitude of ways.

He was able to meet heavy-hitters in the fashion industry across Canada because of this competition, and put his other natural talent---that of a salesperson---to work. Gilroy mingled and wowed the crowds. "My name now has credibility behind it. I have major recognition for the quality of my work. What this prize tells people is that I know how to construct clothing, which is huge to potential employers." He already has some post-graduate prospects, but he's keeping their names close to the (impeccably constructed) vest.

But before graduation comes Atlantic Fashion Week, and then his final graduating collection.

Gilroy is participating in Thursday's New and Emerging Designer's Showcase for Atlantic Fashion Week, showing both men's and women's wear. "I'm also working with some fabrics and colours that I don't typically use. It's bright and bold."

Gilroy is almost perverse in some of his fashion ideas. One gets the sense that if Gilroy could design a uniform for the entire world---one perfect, comfortable, versatile garment that we could just wear every day and be done with it---he would. It comes as no surprise that Gilroy is influenced by unconventional menswear designers Raf Simons and Ann Demeulemeester. His charming lack of foofaraw is in opposition to a lot of what makes fashion tick, but his fresh attitude and work ethic promise success.

"I dress for comfort, versatility and multiple occasions. I'm a believer in the slow fashion movement and I try to make one piece work as many ways as possible. I also believe in making clothing that is of good quality so it can withstand a beating," says Gilroy. "I'm not someone who believes in clothing as an art---it serves a basic human need. That doesn't mean I think it should be boring either. 'Fashionable but not feminine' is another quality that defines my style philosophy. I make an effort to wear and create garments that other men can see themselves in. Otherwise, I've failed."

Personally, Gilroy is drawn towards the aesthetic of those further on the fringes. "Homeless people and street performers are often my personal style icons, they don't dress in trend or look like anybody else," Gilroy says. "I like to dress so I can see a reaction from people, whether it's good or bad. I need to know what people think of the clothing that I make and wear so I can better understand what they want."

A bit of a departure from his colourful AFW offering will be his graduating collection. The collection is provocative, but Gilroy believes "a major responsibility of fashion design is to have a finger on the pulse of society." Gilroy's final collection will take inspiration "from the tactical riot gear worn by police. It's all soft-armoured athletic menswear with a few transformable details." Through this line, Gilroy attempts to reflect the current political climate. "We are bombarded with imagery of young adults being beaten by high-tech, armoured policemen. Through mimicry of utilitarian riot gear, regular men can broadcast strength, power and intimidation. This is only the beginning of a major shift in our society---the fight for the return of democracy." The collection, called NOADDEDMSG / ONE, is focused on power, "strong basics build the foundation for layers and accessories. These are men ready for the fight."