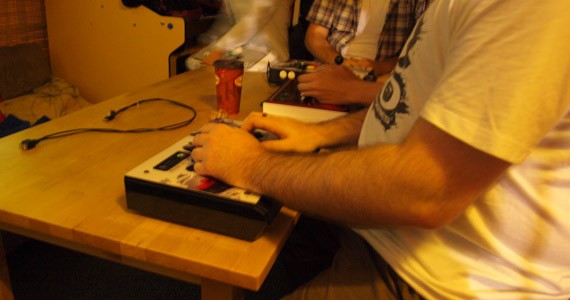 Along the ceiling is a history of consoles, from a ColecoVision to the Xbox 360's ill-fated HD-DVD drive, and on the floor an assortment of arcade machines. It's obvious a lot of love and care was put into the vibe of the store, but it gets even crazier when the sun goes down, people gather and the lights go out.

This is all about Capcom's classic fighting video game franchise. This is about Street Fighter.

Adam Perry owns the store, which hosts gaming tournaments after store hours. "Most people here are friends now, because of this," he says. "A lot of these guys didn't necessarily know each other before these tournaments started. When you're playing online you don't really know who you're playing against."

Six large projector screens get pulled down over the store's displays at game time. The store becomes a frenzy of light and colours as the characters battle each other using famous moves like the Hadouken.

"It's great because when you're playing in a group of people you learn better techniques and its much more social," says Nickolaas Vander Baaren, also known as Pizza Man.

The Last Game Store Street Fighter tournaments take place Mondays at 7pm. The prestigious rank battle event celebrated its second year running on October 2. To get involved you really just need to show up, they're looking for players at all skill levels.

Perry's brother Jonathan doesn't work at the store, but he's the mastermind behind the events. "Street Fighter is my passion, and I've been working very hard to make it grow even larger than it has been," he says. "I had butterflies of excitement in my stomach all day today---not only is this the two-year anniversary of these organized events, but it's been growing so fast."

Winners of such tournaments get their names emblazoned onto the trophies. "It's like the Stanley Cup of Street Fighter around here," Adam says.

The events are mostly free of charge to the players, sometimes it's asked that they pay a few bucks here and there for maintenance of the projector bulbs. Adam says he wants to keep these open to as many people as possible.

Halifax doesn't have a huge community of gaming tournaments unlike major cities such as Toronto. Most groups are low-key and organized through Facebook. Universities are a good spot to look for gaming groups; Dalhousie has a society for video games and board games on campus.

Fighting games are often the best genre for these groups because the matches are generally short so everyone is able to have a round of gaming pretty quickly. A former group known as Halofax was focused on the popular first person shooter Halo 3, but it folded.

Street Fighter looks like it's here to stay. When the tournaments started only 10 people came to play, says Adam.

"This year we started with 28 and it has gone up to 40 people, just about at capacity."

He says he's not sure what he'll do when it goes over capacity but won't rule out using a bigger venue.

"These events have been great for the community and the store as well," Adam says. "Two years ago, I thought [The Last Game Store] was over, but then I decided to go retro and carved out my own niche, something nobody else was doing."