Video On Demand gets props from Halifax filmmakers

Home video: A Canadian grassroots cinema organization has turned its attention to internet venues as a way to get people watching Canadian movies. 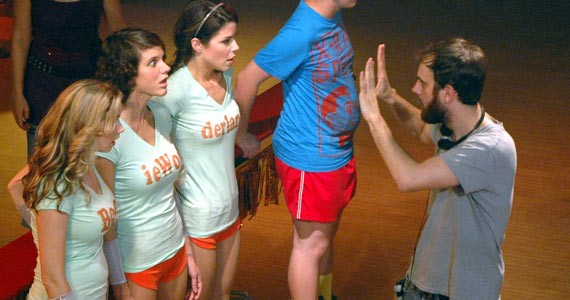 In 2011, Canadians haven't been going out much to see Canadian movies. More people are going online, whether they pay for the movies or not.

Halifax director-producer Chaz Thorne says that's at least partly because Canadians don't even know when a Canadian movie shows up in cinemas.

"It actually is shocking when you're a filmmaker how little Canadians actually know about what we do," says Thorne. "I do believe that there is a significant desire by Canadians to actually watch Canadian content, they just don't know how to find it."

Since 2003, the Vancouver-based non-profit First Weekend Club has been raising awareness about Canadian films opening across the country through grassroots campaigns and word-of-mouth. Now the internet has changed things and the FWC has taken notice. In late October it announced a plan to raise funds for the launch of a new, Canadian-content only Video On Demand service, similar to Netflix. For Canadian filmmakers, this offers a new opportunity to gain viewers and recoup revenue outside the cinema.

"When Canadian films are released in movie theaters, if you don't have a significant marketing budget behind it, you won't even know it's there," says Thorne, whose 2010 feature Whirligig was able to last an extra week in due to support from the FWC.

Bill Niven is a local producer who worked with Thorne on his 2007 feature Just Buried, as well as with Picnicface on their full-length feature debut, Roller Town. For Niven, new distribution services such as the FWC's proposed VOD service are a good step for independent Canadian filmmakers, and something he looks forward to exploring with the distribution of Roller Town.

"It's tough to get theatrical releases--- particularly for small independent films--- and that's virtually all that we do in Canada," Niven says. "That's why I'm interested in new models like VOD. The theatrical is increasingly the domain of the blockbuster. They own that territory, but I think there is still room for the independent gem."

Recently, local filmmakers have embraced services such as Netflix, with directors Mike Clattenburg and Michael Melski's films showing up on the popular VOD website. With the recent announcement by Telefilm Canada of a new Success Index---which will measure the success of a film less by box-office numbers, and more by DVD sales, VOD viewings and international and domestic film festival recognition---this means better funding for filmmakers like Melski, whose 2008 feature Growing Op was picked up by Netflix, broadcast on the Sundance Channel and has gained a cult following online.

"We don't tend to make money as filmmakers in Canada off of box office. We really tend to measure our success and impact by how many people you reach," says Melski. "When you make something easier for someone, they're going to embrace it more readily, and that's what online and VOD are all about."

Although the FWC's VOD service is still in its infancy, local filmmakers are excited about the chance it will provide to reach a wider audience.