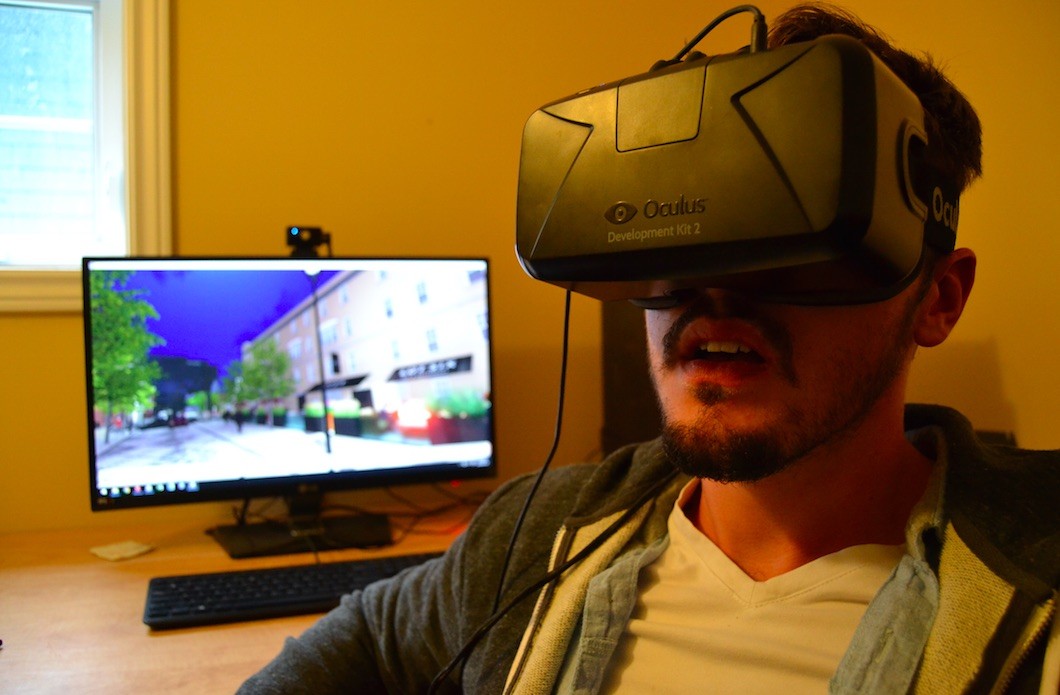 With all the construction and development in Halifax these days, you’ve almost certainly come across one of those flashy project renders, often posted just outside the construction site—a gorgeous illustration of the building’s final design, with perfect lighting, a spectacular angle and images of people revelling in the new space.

The context provided by these renders can be woefully insufficient, however, especially in terms of how they fit into the community. Which is where virtual reality comes in.

Ekistics Planning + Design is among the first in the city using virtual reality to try and fill in those gaps. Many of the firm’s upcoming projects—including Argyle Street’s recently approved pedestrian-friendly walkway—are benefitting from the new technology allowing a better vision of the planned developments to get across, says Ekistics’ CEO Rob Leblanc.

“It’s a tremendous change from a render to actually putting yourself in a three-dimensional space,” says Leblanc, who also serves on HRM’s Design Review Committee. “You’re also able to manipulate what you see—look up, look down—and you process that imagery much differently than you would an animation or a 2D picture.”

Those 2D renders often only feature the building being built, and none of the adjacent landmarks. As the mock-ups are used to pitch the development to those who would approve its construction, the reality of the final building’s place in a neighbourhood isn’t always presented.

“Literally every project that comes across the Design Review Committee shows the building, usually, in the context of a white background,” says Leblanc. “Sometimes, it’s just the box of the neighbouring buildings.”

“They’re certainly a valuable piece, in terms of the review,” says Steven Murphy, the sitting chair of the DRC (an independent board that approves prospective projects before they head to council for final approval). About current 2D models, “It tends to put the whole thing in context.”

But impossible viewing angles, idealized lighting and other tricks of the trade mean important information is getting left to the imagination. “I think it is important, in general, that renderings be held to high standards of accuracy,” says Tristan Cleveland, of the Ecology Action Centre. “It’s the details that decide the impact of a development; how people feel when they’re there. It’s important that it’s expressing the truth.”

Take the controversial Doyle Block development on Spring Garden Road: The underground power lines, wider sidewalks, and landscaped courtyard were all highlighted on renderings. But how the building affects the view from the Central Library was not.

Leblanc doubts these discrepancies are intentional deceit on the part of developers. Rather, it’s just a consequence of the costs, and the limits of current technology. “Yes, it’s true—buildings can be misrepresented,” he says, noting renderings can cost upwards of $20,000. “In a rendering, you can get seduced by a sexy rendering style. You actually fall in love with the rendering, not the content.”

Leblanc’s employed video game engines, 3D survey scans and drones to achieve the VR results, and says they’ll soon become the standard for development pitches because it allows for more detailed proposals that cost relatively the same as 2D renders. “This is, no doubt, the future,” says Leblanc. “VR technology’s going to be so ubiquitous two years from now that people on design review committees, you’ll be popping on your VR glasses to be taken through a presentation.”

A guide to the Halifax Nerdom