Visit with The Realistic Joneses 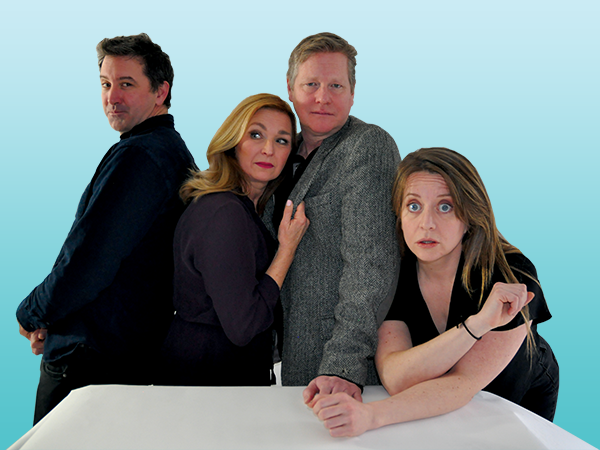 I n the odd and moving The Realistic Joneses, on until this weekend at the Park Place Theatre, one married couple moves in next door to another. Jennifer (Kathryn MacLellan) and Bob (Christian Murray) are dealing with his rare terminal illness (well, she is, he's fading into nothing). Pony (Gil Anderson) and John (Matthew Lumley) are aiming for a quieter, simple life in this small American town. But something is off with them.

"I did stop and ask: 'OK guys, after this first scene'—they were concerning themselves with connecting as characters and trying to navigate the strange language—'what do you think the the audience is thinking?'" says director Bryden MacDonald. "Kathryn said, 'It's a horror film. Anything can happen.'"

Written by Will Eno—"Mr. Eno's voice may be the most singular of his generation," wrote Charles Isherwood in his rapturous review of the 2014 Broadway production in The New York Times—The Realistic Joneses is not a horror story, but it is a hard play to summarize. There's little plot to speak of—some cross-interest between the two couples, a reasonably big lie—and when plot points pop up, they're set down again without much fanfare.

"It's about four people trying to connect, and about the breakdown of communication and what are words really—where did they come from, why do we say them?" says MacDonald. "Relishing the sound of a word—that's right, it does sound odd."

MacLellan, who produced the show through KAZAN CO-OP, the company she runs with her sister Janet, calls learning the script "hell," then laughs for a good while. "It's probably the most challenging script I've ever had to learn because of the non-sequiturs and the interrupted thought processes," she says. "It's classic, but not presented in a classical way. I find the writing really fascinating."

Even the title is a bit of subversion—both couples being named Jones has no emotional or plot payoff, but it's another way for Eno to state his theme. "He liked the word 'jones,' although it's often associated with drug use, 'jonesing' for something," says MacDonald. "He liked that reality, but wanted to present it in a gentler, kinder way. Jonesing for connection, being seen or heard. Kinder things."

The script plays like a series of connected vignettes, characters dropping bits of disconnected personal history into scenes, saying what they mean without provoking reasonable objections and generally floundering under a fake gloss—Pony and John—or over-it cynicism—Jennifer and Bob. They're intrigued by one another, they fail one another, they lift one another up. Little happens but a lot goes on.

"It was very tricky to find a naturalistic way," says MacDonald. "It's just that this whole play is all that—non-sequiturs and reaching out and crashing and being present and trying not to look foolish. I find it all very sweet and beautiful the more I watch it."

"It's so tender and weird and truly about communication, which is what the theatre is," adds MacLellan.

"At its heart it's a comedy about being human, about getting through the day," says MacDonald. "You just have to really trust Will Eno—if you do, there's a code that cracks and the world just opens up to you, if you do what he says."