Paper collages landing somewhere between book and sculpture at Hermes. 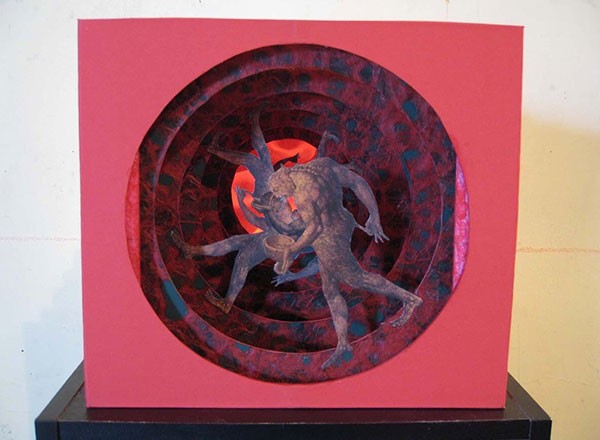 There is a children's game called Exquisite Corpse, which is much less gruesome than the name suggests: A piece of paper is folded three times and players take turns drawing the head, torso and legs of a figure, to create a weird and funny Frankenstein's monster.

Though far more complex in their structure, James MacSwain's collages have a similar effect. With references pulled from books on ancient Egypt, craft history and children's literature, in Ex Libris MacSwain composes strange worlds in his paper dioramas, collaged portraits and accordion books.

Standing up by the grace of the weight of their own sturdy paper, MacSwain weaves magicians, devils and queens into curious worlds. It's as though he has cracked open a book and peeled away the words from a complicated story, leaving us with the unravelled, messy visual soup beneath them.

MacSwain is interested in the book as an object and plays with the materiality of paper and ink. Constructed of paper and card, his works feel dense and richly coloured, somewhere between book and sculpture. The collaged figures in these scenes—cherub free-falling with diving airplanes, stained glass saints and nude actors wearing giant masks —call to mind how precious we consider books, for we worry that these may have been cut from beautiful books, like teen stars from magazines.

While quotes from Lewis Carroll written in vinyl on the gallery's bench remind us of childhood classics, MacSwain's portraits are often of more adult fare: Composed of individual printed photos, they include shots of friend's crotches and half-naked drag queens sprawled across the gallery wall. But where they venture into the bawdy, MacSwain's works also hold onto a childhood fascination with books. After all, from games to books, the best artists always remember what it was like to be a child.