Kick off your fall art experience with Nocturne, and keep it rolling with our exhibits of interest

by Stephanie Johns and Lizzy Hill 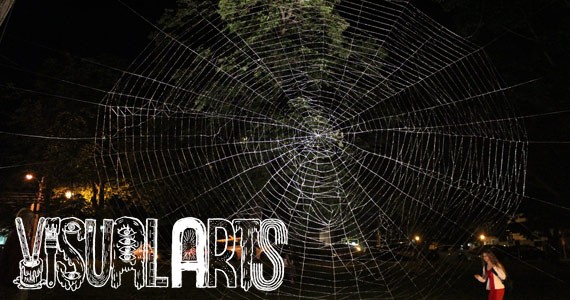 Nocturne
October 13, 6pm-midnight, various locations, nocturnehalifax.ca
Once a year, Halifax's streets, parks and buildings are transformed into an art lovers' utopia, and this year's no exception. During the Nocturne Art At Night festival artists will take over public spaces and venues across the city, creating surreal, sensory experiences in unlikely locations. This year, Nocturne Board chair Rose Zack says many of the artists take a playful approach to their work, creating works with a "storybook quality."

For instance, Zack says that for artists' Sherry Lee Hunter and Shelley Wallace's performance piece Antic Art/Instar Variation we'll see "six-foot-tall ants" doing mobile performances in and around Parade Square (1841 Argyle Street). In Andrea Puszkar's Neighbourhood Watch, we'll witness around 200 clay bunny rabbits with glowing eyes "reclaim" the green space next to Bishop's Landing. And for Knut Braaten's Accidental Cryptozoological Adventures (full disclosure: part of this features a video I'm terrified to watch of me pretending to give birth to a demonic furry cod-man that lives at the bottom of the harbour), artist Brent Braaten's mobile performances and installations take inspiration from cryptozoological creatures (check out Plan B and Gottingen Street).

Several works also touch on our relationship with the Halifax Harbour and respond to the site of the waterfront. Artists' Courtney Kelsey and Zachary Barkhouse's will install a floating installation on a 90-foot barge in the Halifax Harbour, drawing inspiration from Devils Island and exploring isolation at sea.

"It's the first time we've done that---had something in the water that scale, so we're pretty excited about that," says Zack.

Zack says the Festival reached its financial targets this year, and developed some unique new partnerships this year: Propeller Brewing Company has launched Nocturne Dark Lager, and is donating $1.50 off each bottle to the festival. As if we needed a better excuse to drink to Nocturne! --Lizzy Hill

Kai Chan: A Spider's Logic
October 20-December 2, Saint Mary's University Art Gallery, Opening reception Friday, October 19, 8pm
Curated by Sarah Quinton, Kai Chan's A Spider's Logic weaves together a story of everyday life using mixed media sculptures and installations. Organic and soft, knots, twigs, buttons and other joys from the junk drawer are pieced together, referencing Chan's roots in China and pieces of the natural world and life in Canada. The pieces, from 1975 to 2010, create a bridge between the natural and the constructed, Aurora features rich crimson coloured cotton and nylon thread wound like skeins of yarn, creating a thick, curved fringe; Playing Mountains, Playing Marriage is a smooth, stacked bristle made of tiny twigs that might make you start your own collection on your next walk through the woods. --Stephanie Johns

Jamie Q, The Possibilities are Endless November 15-December 14 at ( ( ( Parentheses ) ) ) Gallery
London, Ontario's Jamie Q's paintings, sculptures, prints, and fabric collage will blast through the grey slushy days of winter with reckless abandon. Featuring abstract pieces from Jamie Q's book, The Possibilities are Endless, launching at the show. Stop into Parentheses and shake off November's bitter chill and salt-stained everything with Jamie Q's work, like a glass of OJ for your artistic soul. --SJ

More, please
Culture vultures will be coming home to roost at the city's newest gallery, opening October 2, 8pm. Pigeon Gallery (pigeongallery.org) is a new art space located in the lobby of the Bus Stop Theatre (2202 Gottingen Street) committed to providing another dedicated venue for emerging artists to showcase new work. The opening gala will be hosted by comedian Bill Wood and Pigeon Gallery founder and curator Halloway Jones. The gallery's first show will feature the psychedelic prints of Hugh Mater and the opening festivities will have you cooing with sketch comedy, a screening of Russ Meyer's Faster Pussycat! Kill! Kill! with a performance art intermission and live music by Special Costello and DJs. New artists will be showcased every third Tuesday, complete with artists talks and screenings from the multimedia, art and music party titled Adventures in Cinema. Upcoming exhibiting artists include Angela Glanzmann and Stephanie Yee. While the Fall Arts Preview really is all about getting out of the house and seeing things first-hand, we're the first to admit that being lazy can be great. Get a touch of culture and vicarious thrills by hitting thebartervan.blogspot.ca to follow Halifax photographer/graphic designer Angela Carlsen. Carlsen packed up her life in a camper van to take the road trip to end all road trips across North America. Bartering her photography and art pieces (including homemade postcards) for basic services like food, water and power hook ups, Carlsen is truly living the dream. Check the site to donate, barter or just look at lovely photos and plan a trip of your own. Seeds Gallery might be all you need to have holiday shopping wrapped up. Opening October 10 at 5:30pm and running to November 4, Alissa Kloet's Keephouse Studio products conjure up images of a simple, beautiful home, and might be just the ticket to get your pigsty in order. And throw out that pilly sweatshirt and upgrade to a t-shirt from Paul "Hey You Guys" Hammond for the October Seeds t-shirt of the month. —SJ