Misspellings are the least of it. 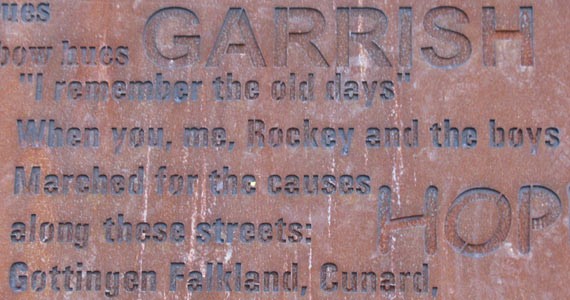 North is Freedom is the name of the nasty monument outside the Halifax North Memorial Public Library. This summer it was absent for more than two months, carted off to Cowie Hill for storage while its base was chipped out and replaced, leaving the library plaza an ugly construction site. But now it's back. Curses! I live with a view of it out my windows.

The coldest, shortest month of the year is Black History Month and this thing is a giant slab version of that. On Gottingen all the hip and fun places are south of it: Edna, jane's, Plan B, Alteregos, Ratinaud, Parentheses, Cocoon Boutique and more. There's nothing much fun at all north of North is Freedom. It stands as a brutal billboard for all those travelling north. This ain't the north that's freedom.

This ugly-ass, rusty, chunk of cor-ten steel was dedicated on June 28, 2007. I was there, feeling crazy for hating it on first sight, and hypocritical as I applauded every time everyone else did. NiF is like the monolith which appears in 2001: A Space Odyssey just before the monkeys start bashing tapirs and each other with bones.

I didn't notice the spelling errors that first day, but they're there, big bold blemishes etched into NiF by surface water jet cutting. Gerrish, the closest cross street, is spelled Garish. The first name of Rocky Jones, the lawyer and human rights fighter who died last July, is spelled with an E, maybe because his real first name Burnley has one. Who the fuck knows. Rumour has it there are other errors; take the kids down and make it family fun time looking for more. Get them to count the number of uncapitalized proper nouns, or find the quotations, all surrounded by ambidextrous quote marks (holdovers from the days of typewriters and early Unicode, looking like two apostrophes): ''wrong,'' instead of the correct curly quotes: “right.”

To annoy myself further I watch 2001 until the first monolith appears among the primates. When it does, I think, fuck that looks like North is Freedom. I ask Jamie MacLellan, who is the public art facilitator with HRM, how big NiF is. His reply: 18 feet high, eight feet wide, two feet deep. Well, no wonder. The monkey monolith and this cock-up have exactly the same proportions: 1 : 4 : 9. Exactly. I have my first and last stab of happiness about the whole clusterfuck.

Is a monument the same thing as public art? Is it fair to judge? A monument doesn't have to be boring and brutal. Consider the work of Maya Lin: the Vietnam Veterans Memorial, the Civil Rights Memorial. Consider the Big Nickel in Sudbury. Could NiF be called art, even in an illiterate way, like Thomas Kinkaide's work? Before these arguments even begin, the beast is hobbled by two huge strikes.

One, the spelling errors alone point to a job done without heart or painstaking practiced craft, two hallmarks of art. Totally the fault of the artist.

Two, that artist was at the mercy of committees and mandarins. You know the old saying: a camel is a horse designed by committee. Just the thing if you want an outcome with priorities spread all over. Requirements in the proposal issued in 2005 included, "The theme for the sculpture must reflect and be representational of the information derived during community consultation" and "particular attention should be paid to major community relevant historical events like the Halifax Explosion; strength, rebirth, diversity of age and cultural, celebration and learning." Fuck me. That's not what a piece of art can do; that's what an essay might do. Or a really boring book with no pictures.

One more thing: the new base has been tinted to supposedly mask the stains from the rust as it migrates downwards. I predict: not so much.

And fuck me. Now they've installed spotlights. It's going to be lit at night.

Another thing Jane Kansas doesn't like about that monument is the three green human figures; she thinks they look like there's been a serious disruption with the teleporter.