In solidarity with all black people 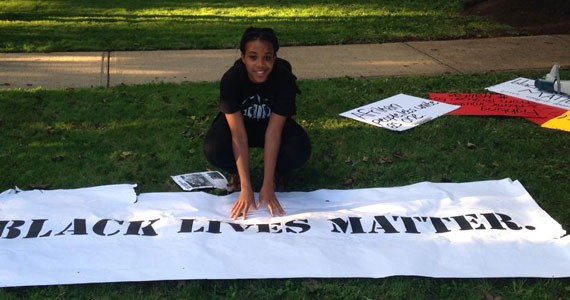 "An injustice anywhere is an injustice everywhere." After Michael Brown, an unarmed black teenager was shot six times by Ferguson police, the town was turned into a war zone by law enforcement. The most striking images in Ferguson are not of the black protestors, but are of the State. The kevlar vests, SWAT teams, tear gas and live ammunition used to invoke fear in the Ferguson community has highlighted the way in which the State views black life. As a black woman, and a conscious one at that, I stand unequivocally in support of my fellow black brothers and sisters wherever they are being treated unjustly. Although one can observe the overt forms of racism in Ferguson by police, it takes people who are acutely aware to notice the more covert forms. The character assassination of Michael Brown, be it about his alleged break-in attempt to a store in order to steal cigars, should not be overlooked. This in fact highlights a type of racial discrimination that, more often than not, goes unnoticed. Even if such a story was true (which it is not), how does it in any way justify the brutal murder of a young black man? Is a black person's life worth less than a couple of cigars?

Some people may view the situation in Ferguson in isolation, however conscious people can link the events unfolding in Ferguson to a global context regarding the value of black life. The murder of Michael Brown represents oppressive systems and structures which target black and other persons of colour. The incident also represents imperialism. From the beautiful community of Africville being bulldozed, to more recently the ongoing development that is destroying the Beechville community, one can see how Ferguson's events directly correlate to Nova Scotia. Tuesday, as we protested in solidarity with our brothers and sisters worldwide, black as well as Native people recounted racist experiences they have faced here in Nova Scotia. Of course these experiences are usually not overt, which makes them all the more worrisome. From being followed by security in stores; to people uttering racial slurs; to the classic Driving While Black scenario; to the lack of jobs, adequate housing, healthcare, Pan-Africanist centered education; receiving disproportionate sentences and increasing high school dropout rates, it would be unjust to claim that Ferguson's events do not relate to the black experience in Canada, and Nova Scotia specifically.

Although our rally may have been prompted by the wave of police brutality perpetrated against black people in America, it aimed to awaken the consciousness of African people, in order for them to start to strategically organize to ensure a better future. When you see Trayvon Martin shot to death, or Marlene Pinnock being repeatedly punched in the face, or Ersula Ore manhandled, or Eric Gardner chocked to deat, or Michael Brown shot to death, it becomes a question of our basic humanity as Africans all over the world. You can't imagine doing that to someone you see as human, and that's precisely part of the problem—us Africans are still fighting to be seen as human. Someone is benefiting from the fact that we are constantly beaten and gunned down. Someone's livelihood depends on it. Once you start to tackle that, you're getting to the root. We sincerely hope that the rally has prompted people of all colours to start addressing these difficult questions.

Ntombi Nkiwane is a second-year Dalhousie University student from South Africa in the political science program. She is one of the organizers of last Tuesday’s Halifax—Hands Up solidarity rally.