Lux Habrich is the youngest artist to show at the exhibition celebrating 75 years of the Nova Scotia Talent Trust. 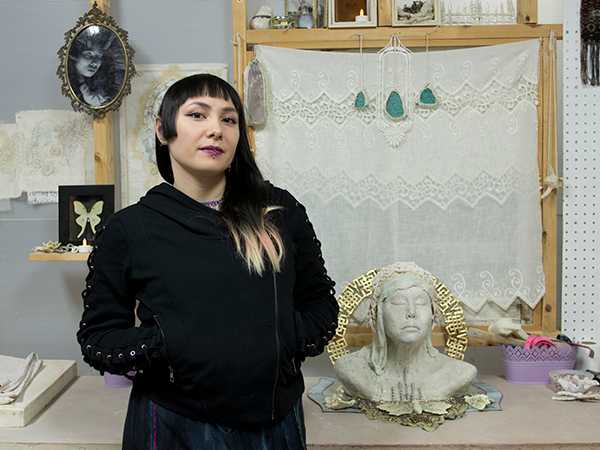 "NSTT has had 75 years of this, so I assumed they'd have a whole bunch of artists exhibiting, not just 10. It's totally overwhelming," says Habrich.

A graduate of NSCAD, the artist's work focuses greatly on her own mixed identity, inherited trauma and cultural wisdom. Habrich says fellow exhibiting artist and former instructor Dan O'Neil has been "pivotal" for her career. "I was filled with a lot of doubt pursuing a creative [profession]. Dan is so honest," she says. "He was able to let me know what my practise was before I even knew."

Habrich will debut two installations at the exhibition—opening at the MSVU Art Gallery on May 25—one of which is a series of drawings from a first-year class with O'Neil from 2012. "I only showed them in school, they weren't featured anywhere else, and had kind of fallen to the side," she says. "And then I thought, 'You know what? I need to honour these.'"

The artist's other installation Borrowed Time, a hand-built sculpture of two feminine hands in offering, is a "reference to martyrdom… Lately I've been thinking a lot about femininity and sacrifice, general and emotional labour."

Habrich recently added an iridescent liquid coming out of the centre of the hands, to show "taking on labour, exhausting oneself." "Hands are our primary method of navigating the outside world," she says. "They're incredibly personal. Almost like a signature."